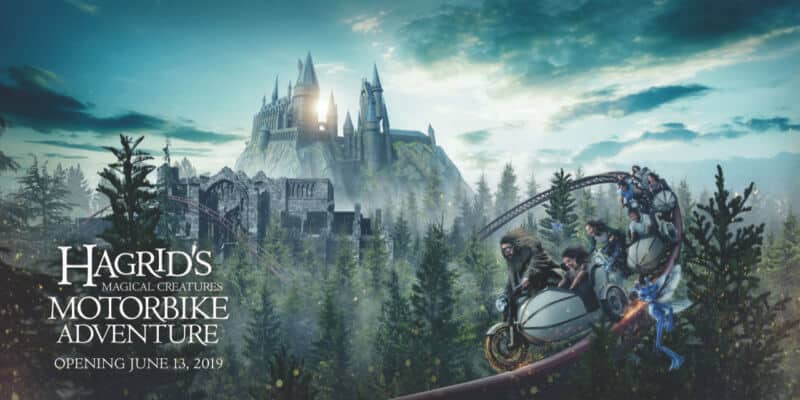 Hagrid’s Magical Creatures Motorbike Adventure will open on June 13, 2019 in The Wizarding World of Harry Potter – Hogsmeade at Universal’s Islands of Adventure, and feature the most highly-themed coaster yet. For the first time ever, guests will fly with Hagrid on a thrilling roller coaster ride that plunges into the path of some of the wizarding world’s rarest magical creatures.

According to Universal Orlando, more details on the new attraction will be revealed in March.

In October 2018, Pottermore shared a first look at the new attraction with the following artwork:

This new ride takes the place of Dragon Challenge, which closed in September 2017. Hagrid’s Magical Creatures Motorbike Adventure joins other popular Wizarding World attractions including Harry Potter and the Forbidden Journey, Flight of the Hippogriff, and Harry Potter and the Escape from Gringotts.

Inside the Magic came pretty close to predicting this ride back in the summer of 2017, which you can see from our first prediction here in 10 “Harry Potter” Rides We’d Like to See at Universal Orlando’s Wizarding World to replace Dragon Challenge.

Will you be among the first to ride this new Wizarding World attraction on June 13, 2019?