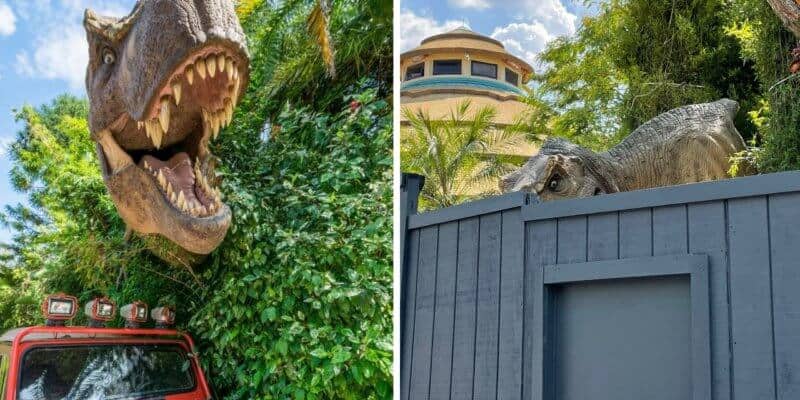 One of the best things about Universal Orlando Resort is that although there are plenty of new advancements coming to the parks — from the Wizarding World of Harry Potter introducing an entire fandom to the theme park to the VelociCoaster bringing in a lot of the Jurassic World IP to what was previously just a Jurassic Park area — the classics still live on.

If you are a fan of Universal Studios Florida’s classic attraction E.T. Adventure, you can see that the ride is still in place bringing the Steven Spielberg film to life. The Jaws ride may have left, but typically, Guests can still take a photo with the handing shark (however, it is currently removed amid the pandemic), and Back to the Future fans can snap a picture alongside a DeLorean!

One photo op that was moved around quite a bit was in the Jurassic Park area of Universal’s Islands of Adventure where the giant dinosaur and Jeep stood that Guests pose with and pretend that they, too, are on Island Nublar. Originally, the photo op was over by Thunder Falls Terrace, but it ended up being moved to right around Burger Diggs, as we can see from Brandon’s (@bmawk13) Instagram post!

Now, it seems that Universal is installing another dinosaur at Thunder Falls Terrace, so there will be a variety of dinosaurs for Universal Guests to look at and snap pictures with.

Inside Universal (@insideuniversal) Tweeted photos of the installation stating:

Additional, Gregory Hall, Art Director for the new VelociCoaster, posted a Tweet featuring a single dinosaur emoji, to which ThrillGeek replied with another image of the new photo op site:

A day late and a dollar short. pic.twitter.com/j191v6mDLH

Although dinosaur photo ops at Universal are something many Guests are used to, this new giant T-Rex statue certainly looks like a new photo op that Guests will enjoy! It is great to see that many Guests who will be traveling to Universal Orlando Resort in the next few months to ride Universal’s latest Jurassic coaster, VelociCoaster, may be able to see the terrifying T-Rex for the first time in just a little while.

Plus, having more dinosaurs out and about in the land will only continue to enhance the immersion that the land creates, never leaving Guests feeling like they have escaped the dinosaurs. Guests can also get photos with raptors at Raptor Encounter across from the new coaster.

What photo ops would you like to see brought to Universal?