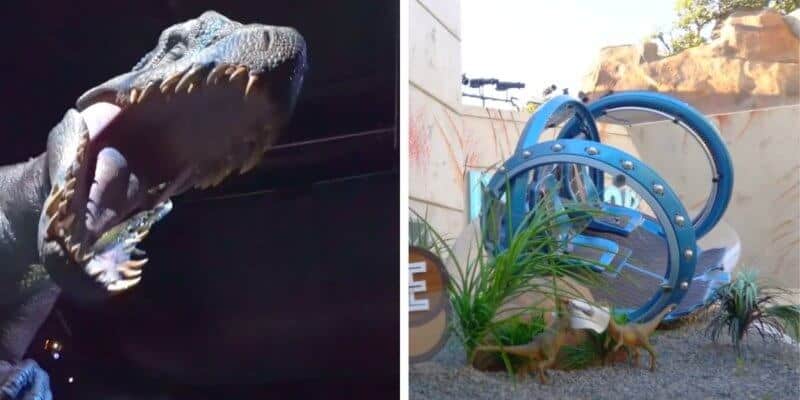 As Universal Studios Hollywood continues to gear up for their April 16 opening, there are many things that the theme park is getting ready to showcase, including one of their new attractions Jurassic World – The Ride.

In case you didn’t know, Jurassic Park – The Ride got a whole refurbishment and update to reflect the current Jurassic World franchise, and now, Guests are going to be transported to Isla Nublar with Owen Grady (Chis Pratt) and Claire Dearing (Bryce Dallas Howard) and really feel like they are in the film.

The new ride’s biggest change comes with its new ending, as outlined on the Universal Studios Hollywood website:

Although the park has not officially opened, Universal has been testing Jurassic World – The Ride with Guests aboard, since there are currently Guests in the park enjoying the Taste of Universal festival that is currently underway. Thanks to YouTuber, Theme Park Shark, we have been able to watch a full POV of the new attraction and see all of the changes that were made. We must say, it looks fantastic!

There is a lot more Jurassic World signage in the attraction now, as well as characters from the film throughout. Combine that with the blue Gyrosphere that we instantly recognize from the first Jurassic World movie and, right away, it feels like a totally new ride.

The end of the ride, as we mentioned, is the biggest change, as we get to see not one, but two, dinosaurs battle — much like the finale of the first Jurassic World film!

There are still many nods and references to the Jurassic Park attraction, but it seems that at Universal Studios Hollywood, Guests will have to leave the older franchise behind. At Universal Studios Orlando, however, Guests can currently enjoy a mix between both the classic film with Jurassic Park River Adventure and the upcoming Jurassic World VelociCoaster both finding a home in the same land.

Do you like the newly themed Jurassic World – The Ride, or would you have preferred to keep the older Jurassic Park theming?