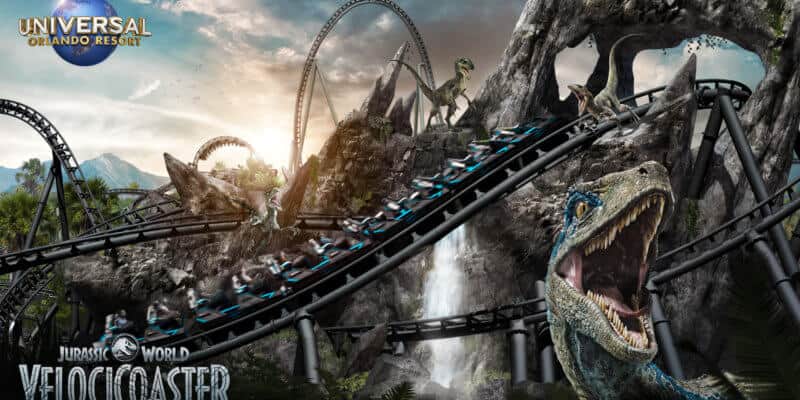 Universal’s VelociCoaster has been gearing up to open, and after all of the construction we have seen, it is easily the most anticipated attraction for Universal Orlando guests in 2021. Previously, Universal and Jurassic World fans were looking forward to summer 2021 to have the chance to ride along with the carnivorous velociraptors — but now we have an exact date.

Universal Orlando has officially announced that we can expect to ride Islands of Adventure’s latest roller coaster, VelociCoaster, on June 10, 2021, for the attraction’s grand opening!

The announcement was also added as an update on the official Universal Orlando Resort webpage for the upcoming attraction:

Feel the Rush of the Hunt.
Speeding through the jungle, rising high above the terrain, it’s the apex predator of roller coasters: the Jurassic World VelociCoaster. Now you can board your vehicle for a high-speed dash through the park’s raptor paddock. Feel the rush of the hunt as you race alongside these nimble predators, twisting and soaring above the land and water. The Jurassic World VelociCoaster opens June 10 at Universal’s Islands of Adventure

This announcement follows a hype train that has been led by the Universal Orlando social team who have been slowly releasing new graphics of the sleek blue coaster, as well as trailers and Tweets about the ride. Considering the VelociCoaster is the biggest attraction Universal Orlando is opening this year, its success is quite important after the financial loss that Universal Orlando has faced through the pandemics park closure, reduced capacity, and drop in tourism.

What can we expect from the VelociCoaster?

Although we do not know all the details about Universal Orlando Resort’s VelociCoaster, we do know a lot after examining and reporting on its construction over the past several months. VelociCoaster will be a high-speed Jurassic World storytelling coaster that also boasts a 150-foot drop where riders will get four seconds of gravity-defying stomach churns.

The story of the coaster is that riders are going on a velociraptor run, and although Universal has not stated this yet, this reporter believes that something will go awry on our journey. If we take a look at the track, we can see that velociraptors have been placed in such ways that they are facing the coaster as it goes by. This only caters to the theory that these dinosaurs are running toward us — not with us.

The epic and jagged rock work also has a cracked velociraptor egg on it, which could mean that more dinosaurs have been unleashed than anticipated. Also, let’s not undermine the fact that the coaster takes place in a padlocked area to protect the outside world from these dangerous creatures.

There are also two show buildings that we have yet to see the interior of yet, but considering the animatronic scenes that were created for Hagrid’s Motorbike Adventure, there is a high possibility that they will be more than just loading and unloading docks. The coaster will hold 24 guests each ride, with two coasters running simultaneously — according to Universal’s concept art.

If you want to ride VelociCoaster on June 10, you should plan a Universal Orlando Resort vacation! Click here to begin planning today your visit to Universal Studios Hollywood, Universal’s Islands of Adventure, Volcano Bay, and CityWalk today!

Will you be riding VelociCoaster in 2021? When do you plan to visit Universal Orlando?