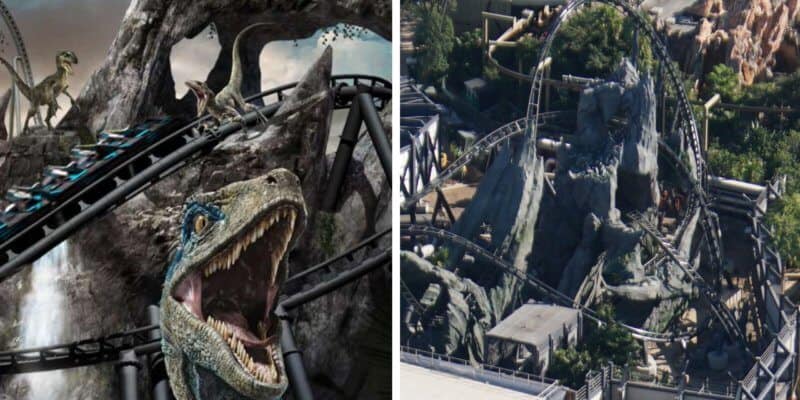 Universal Orlando’s most anticipated upcoming ride for most is the Jurassic World themed attraction: VelociCoaster. Today, we get to see exactly what has been going on in that raptor enclosure.

If you have been following along with Inside the Magic’s reporting on Universal’s Islands of Adventure’s VelociCoaster, you know that this beast is progressing quickly for its summer 2021 opening. So far we have seen many exterior shots of the new roller coaster, but thanks to Bioreconstruct, we can now get a bird’s eye view of what the coaster really looks like from the inside up until now.

Universal has been installing lots of trees and greenery around the VelociCoaster to set the tone and setting of the attraction, as well as to provide a barrier between this prehistoric world, and the Wizarding World of Harry Potter, which sit directly next to each other.

Below we can see an “Aerial view of the increasing jungle at Jurassic World VelociCoaster across from River Adventure. Trees recently transplanted along the dinosaur fence.”

Aerial view of the increasing jungle at Jurassic World VelociCoaster across from River Adventure. Trees recently transplanted along the dinosaur fence. pic.twitter.com/c4OKGOrw4P

One of the coolest things about this shot, in my opinion, is that we can see the raptor enclosure fence really take shape and give us that feeling that it truly is holding everything in. The rock work is becoming so expansive, that with the heavy-duty enclosure surrounding it, it truly creates an eerie feeling that something dangerous lies within.

We also can see a complex look at the VeliciCoaster track, which has so many tight twists and turns interweaving throughout the rock work, something that you may not notice from the outside looking in.

Below we can see that in the top left-hand corner, we will get our first launch right out of the show building in a straight shot which will lead to an upside-down turn. Since the attraction’s backstory is focusing on Jurassic World, allowing us to go on a run with some raptors, the idea of a first launch to blast us into our run makes perfect sense.

Also, considering the launch is coming out of a building and we know we are meant to be running alongside raptors, it is my personal hope that within this building will be animatronics or some sort of scene that sets the scene of being surrounded by raptors.

Aerial look at the first launch area of Jurassic World VelociCoaster. Trains leave the station at top left, and return through the U-turn at right. pic.twitter.com/ZC4CzlQgxg

We can also see how the coaster will end, it seems like we will end up fully enclosed in the fenced U-turn, almost as the storyline could lead to us needing to wrangle the raptors back into their cage.

The U-turn is quite long, so it will be interesting to see what visuals and sounds take place within it to keep the thrills going and if this will be a fast or slow return to base and safety.

Aerial view of Jurassic World VelociCoaster near Three Broomsticks in Hogsmeade. Many trees have been transplanted. pic.twitter.com/isqSxWZ5Bf

We can also see that the progress that the track has made over the lagoon. With a now completed VelcoiCoaster, we can see a much more pronounced view of the track and see how close it will get to the water. It also shows us that there is a decent portion of the coaster that takes place here, which will be very thrilling to ride.

I mean, there will be raptor screams in your ear coming from the ride vehicle while you spiral over a body of water, which sounds terrifying and thrilling all at the same time.

If you want to be up to date on all things VelociCoaster, sign up below for our newsletter so you can get all the updates you need!

Are you excited to ride the VelociCoaster?

Comments Off on PHOTOS: Enter The Enclosure of Universal’s ‘VelociCoaster’