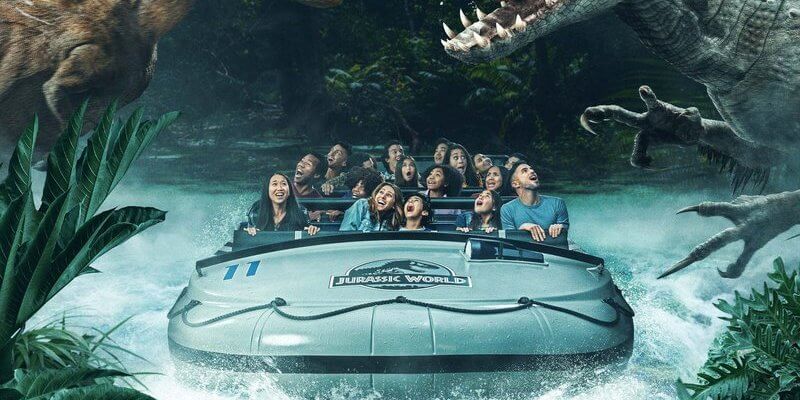 Universal Studios Hollywood announced last week that they would be officially opening the park back up on April 16, with a Passholder Preview day occurring on the 15th.

We’re officially reopening on April 16! Park tickets will be available online only, beginning April 8. At this time, theme park visits are limited to California residents. To celebrate Pass Members, we’re hosting an AP Preview on April 15 and offering additional Bonus Days that can be reserved online starting April 5. To learn more, visit link in bio

Today, they gave excited Guests attending their Taste of Universal event a special treat of being able to see the theme park testing a ride before opening.  Theme park blogger @thecalibae reposted a video of the water ride Jurassic World – The Ride going down the watery drop:

Considering that this attraction got an impressive update during the theme park closure, seeing it being tested is definitely a promising sight for Guests.

This is the first time Guests have shared that Universal Hollywood is testing attractions before reopening the theme park. But since several Taste of Universal Guests have taken to social media to share videos of Jurassic World – The Ride being tested today, it’s clear that there is a lot of hype!

The theme park has been partially open since mid-March for its Taste of Universal event, but only limited shops and restaurants have been available for Guests to experience.  There have been no rides running during the event.  Still, the event has been such a success that the park even had to add more days to the event to accommodate even more Guests who wanted to attend.

Upon its reopening, Universal will continue to enforce their COVID-19 health and safety regulations that are currently in place for Taste of Universal.  This will mean that they will only allow in a limited number of Guests in order to comply with the theme park reopening guidelines set by the State of California. There will also be a mask requirement and social distancing will be enforced.

Universal invites Guests who have a questions to visit their website for answers and occasional updates.  Inside the Magic will also keep you updated as we hear more about the fast-approaching California theme park opening.

It was previously announced that Universal would have a new ride open when the park opens.  The Secret Life of Pets: Off the Leash will make its theme park debut for the Passholder Preview on April 15.

There is no official list of what Universal attractions, shops, and restaurants will be open when the park reopens, but it is exciting to see ride testing after such a long shutdown!

Will you be riding Jurassic World – The Ride when Universal Studios Hollywood opens back up?  Let us know below!

Click here to get started planning your Universal vacation!