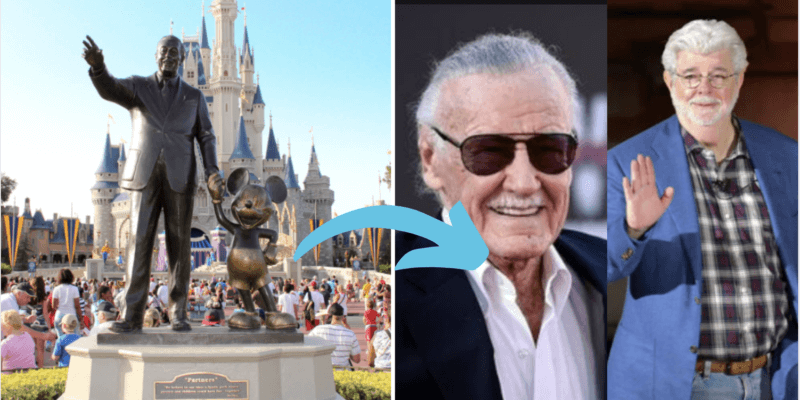 There’s no denying what then-Walt Disney Company CEO Bob Iger’s acquisitions of Marvel in 2009 and Lucasfilm in 2012 did for Disney.

The two companies expanded the Disney umbrella to include two new — incredibly passionate — fandoms who have, aside from the incredibly divisive Star Wars sequel trilogy, largely embraced everything The Walt Disney Company has done with their beloved franchises.

From the Marvel Cinematic Universe Avengers movies featuring the likes of Robert Downey, Jr. as Iron Man/Tony Stark, Mark Ruffalo as the Incredible Hulk/Bruce Banner, Brie Larson as Captain Marvel/Carol Danvers, Chris Evans as Captain America/Steve Rogers, and more to Jon Favreau and Dave Filoni’s The Mandalorian, which has introduced Star Wars fans to characters like Din Djarin (Pedro Pascal) and Grogu (AKA The Child AKA Baby Yoda), there’s no telling just how far these iconic brands can expand under the Walt Disney Company banner.

Now, it seems that some fans believe the impact Lucasfilm founder George Lucas and Marvel Comics creator Stan Lee have had on Disney is more than — or at least equal to — Walt Disney’s legacy.

A new poll on the WDW Magic fan forum asks this question:

Should The Partners Statue Be Replaced With George Lucas, Stan Lee, And John Lasseter Holding Hands?

At first glance, this, of course, seems like a wild idea — and 66.7% of fans agreed that Walt Disney and Mickey Mouse should remain the focal point of Disney’s castle theme parks around the world. However, oddly enough, 33.3% of the Disney Parks fans who have voted in this poll so far believe that the Partners statue should be replaced with a monument honoring these world-builders who have created, arguably, some of the most amazing fictional worlds in history.

These were the results at the time of this article’s initial publication:

Walt may have started the Disney empire, but it’s the minds of George, Stan, John, and James keeping the show running new & fresh today. Popular opinion? Most unlikely. Logical? Now that’s the question..

And before any of you accuse this of being rubbish because I said George Lucas instead of JJ Abrams [A-lister Abrams worked on the Star Wars sequel trilogy], I was referring to the creative minds behind the original product & characters being added to the parks today, not the people recycling what’s already been created.

This notion is, of course, very unlikely to ever become a reality — after all, “it all started with a Mouse” and Iger could never have purchased Marvel Studios and Lucasfilm in the first place without Walt Disney’s incredible vision and foresight. Disney has also never indicated that the Partners statue will be replaced, and the company even recently refurbished the statue at Disneyland Park.

Related: Will Avengers Campus Be the Next Expansion of Downtown Disney?

The idea does, however, merit some consideration in regard to the construction of another statue, perhaps somewhere at Disneyland or Disney California Adventure, since the Anaheim Disney property features lands themed to both Marvel and Star Wars worlds.
Walt Disney World is unlikely to ever receive a Marvel-themed area due to licensing issues.

What’s next for Marvel and Star Wars?

At this time, both franchises have a lot going on in regard to content. Numerous new Disney+ streaming series were announced at The Walt Disney Company’s 2020 Investor Day event and in the days following — 11 in the Star Wars galaxy and 10 in the MCU.
Stan Lee passed away in Los Angeles in 2018, but 76-year-old George Lucas — in spite of selling Lucasfilm nearly a decade ago at this point — is rumored to be seeking increasing involvement in the future of Star Wars, specifically in regard to The Mandalorian saga.

Although the Skywalker Saga officially ended in 2019 with Star Wars: Episode IX – The Rise of Skywalker, featuring the trio of Rey (Daisy Ridley), Poe Dameron (Oscar Isaac), and Finn (John Boyega), characters from Lucas’s original trilogy — Star Wars: A New Hope (1977), Star Wars: The Empire Strikes Back (1980), and Star Wars: The Return of the Jedi (1983) — have made appearances in The Mandalorian.
Both bounty hunter Boba Fett (Temuera Morrison) and Jedi Master Luke Skywalker (played by a CGI de-aged Mark Hamill) appeared in The Mandalorian Season 2 — therefore, it serves to reason that Lucas might want to play a larger role in The Mandalorian and its spinoffs moving forward.
Regardless of what ultimately happens with Lucas’s Star Wars future, it is certainly an exciting time to be a Star Wars fan or a Marvel fan.
What do you think? Do Stan Lee and George Lucas deserve a statue in at least one Disney theme park?