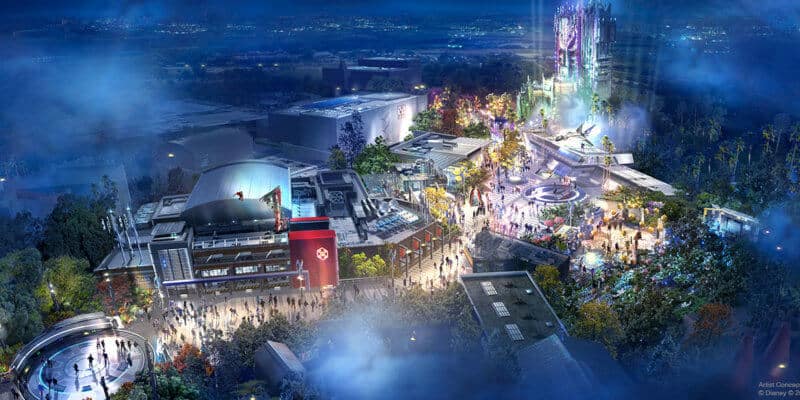 Would you visit Avengers Campus — the newest land in Disney California Adventure at Disneyland Resort — even if you couldn’t ride any attractions? There’s a chance it might happen.

Sources suggest Disney is considering the option of opening Avengers Campus for shopping and dining only as an extension of current Downtown Disney operations. But is it true? Let’s dive into what fans are saying and why this may or may not be a good idea.

Related: Will Avengers Campus Open in Phases or All at Once?

A new video by David at FreshBaked — a Disneyland news and commentary vlog on YouTube — shared the possibility of Disney opening Avengers Campus as an extension of Downtown Disney ahead of reopening the Disneyland Resort theme parks. David said that he wouldn’t call this a rumor, as the news has only come to him from one source, but this may be probable.

So, if this is true and Disney is considering opening Avengers Campus sooner rather than later, is it even a good idea?

Why Disney Might Open Avengers Campus Before the Parks

First, if Avengers Campus is ready to allow Guests to walk around the new land, Disney may decide it’s time to open up the gates.

It was already speculated that Disney would be expanding the areas of DCA where Guests were allowed to meander, shop, and dine — then, as we know, the stay-at-home order was enacted and dining had to close. From an operational standpoint, Avengers Campus is adjacent to Hollywood Boulevard and Buena Vista Street, so it would be a logical expansion of Buena Vista Street operations.

There is also the notion of demand. It’s possible that Disney believes they will need to expand shopping and dining operations even more in Disney California Adventure in order to keep Guests interested in vising the Disneyland Resort during the theme park closure. The hype of the all-new Marvel land Avengers Campus could be enough of a draw to keep bringing Guests to the Downtown Disney District even when there isn’t much they can do.

“Think about it: it’s going to be another six months at least, I think, before they might open it up in any condition…Can they go six months with just Buena Vista Street?

Even if they open up dining again [on Disneyland Resort property] in, let’s say March, or something like that, is that — can we go another six months with just Buena Vista Street and dining? I personally don’t think so. I don’t think there’s enough demand to last that long…Something probably needs to be added.”

David made the point that opening up Avengers Campus — even just for shopping while the dining ban is still in place — could also create a nice flow of Guests throughout the park, something that is currently missing. If Disneyland Resort decides to open Avengers Campus sometime soon, and if they also extend the boundaries where Guests can walk on Hollywood Boulevard, it would allow Guests to circulate through Buena Vista Street, Avengers Campus, and Hollywood Boulevard. Additionally, if Disney wanted to control the flow of traffic, they could decide to have Guests enter the land from one entrance and exit the land through another. 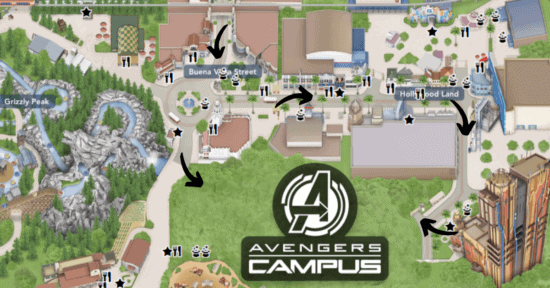 On the other hand, there is also an argument for why Disney should wait to open Avengers Campus. This is very highly anticipated new land at Disney California Adventure, and there is a chance that Disney will want to wait to open the land until they can open it fully: with the attractions, the dining, the shopping, the characters, and everything that make the atmosphere as immersive as it is.

If Disney were to open Avengers Campus ahead of the true opening of Disney California Adventure, not even the characters — the actual Avengers who we’re to believe are working and training there, at the Avengers headquarters — will be present. Part of the appeal of Avengers Campus is the idea that superheroes in training will get the chance to interact with actual heroes. So, if Avengers Campus opens at first as an extension of Buena Vista Street, perhaps this new, highly anticipated land will lose the immersive, hyped-up appeal that many of us have been waiting so long to experience. There’s a chance that, if the land opens early, Guests won’t be as impressed.

Perhaps Disney will want to keep up the anticipation and hype and hold off on opening Avengers Campus until even the Spider-Man stuntronic can make its debut — once DCA is allowed to actually open.

With the current stay-at-home order still in place and the opening of Disneyland and Disney California Adventure still unknown, it’s currently unclear when Avengers Campus will open, whether it will open for shopping and dining only or fully with the rest of the theme park. In any case, if Disney does decide to open Avengers Campus as an extension of Downtown Disney District operations, they will likely not want to open it until the in-person dining restrictions are no longer in place. That way, Guests inside the new land will get to shop and dine, instead of just shop.

Only time will tell what Disney’s next move will be, but we’re certainly excited to learn more. As soon as any official Avengers Campus, Downtown Disney, or Disneyland Resort theme park updates are announced, we’ll be sure to share them.

What do you think? Should Disney open Avengers Campus as soon as possible, even just for shopping or dining? Or should Disney wait until the theme parks of the Disneyland Resort are allowed to open before allowing Guests to set foot inside Avengers Campus? Share your predictions with us.