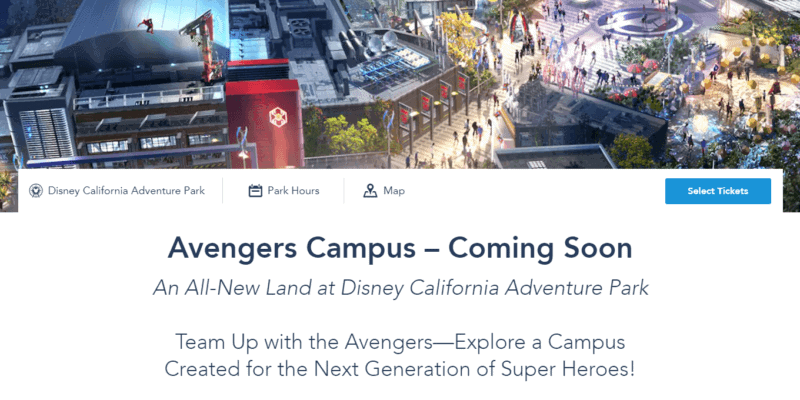 Whether you’re a Marvel fan, a Disney Parks enthusiast, or you just can’t wait to experience the magic of the Happiest Place on Earth again, chances are you’re eagerly awaiting the opening of Avengers Campus at Disney California Adventure.

Back in early 2020 — not long before every Disney Park around the world was temporarily closed — Disney announced an opening date for Avengers Campus: July 18, 2020.

As we know, that date has come and gone, but we now know that there are plans to open the land as soon as possible, or so it seems. However, Disney’s Avengers Campus announcements at D23 Expo in 2019 indicated that the land would open in phases, similar to how the company executed the opening of Star Wars: Galaxy’s Edge at Disneyland and Disney World. But, given all of the delays and the current construction progress, we’re left wondering if a phased opening is still the plan for the Marvel-themed land.

Read More: All About WEB SLINGERS: A Spider-Man Adventure

When Avengers Campus opens, will it open in phases or all at once? Will we only get to experience the new Spider-Man ride, or will both the Spider-Man attraction and the (currently unnamed) E-ticket attraction open simultaneously? Let’s discuss the possibilities.

Confirmed: Avengers Campus to Open in 2021

As mentioned, the new Marvel land at Disneyland Resort was originally intended to open in July 2020. That opening date was pushed back indefinitely due to the ongoing closure of Disneyland Park and Disney California Adventure Park. However, pending an opening date of the theme parks as well as the new land, it has been made clear that Disney intends to open Avengers Campus at DCA sometime this year.

The 2021 opening of Avengers Campus has been expected, but many fans were certainly excited to read that it was confirmed, once Disney announced it recently. Since the theme parks of the Disneyland Resort are still temporarily closed as a result of the ongoing pandemic, Disney is unable to announce exactly when in 2021 Avengers Campus will open. Furthermore, we aren’t yet sure if Avengers Campus will open on the same day that DCA reopens, or if the new land will reopen later on this year. Still, knowing that the land will open in 2021 is definitely a treat for Marvel fans.

But when Avengers Campus does open this year, will it open in phases or not?

Which Attractions Will Be Available When Avengers Campus Opens?

A recent report by the OC Register states that the land will open in phases, which is consistent with what Disney previously stated:

The first phase of the new land will open with a Spider-Man dark ride, Doctor Strange special effects show, Ant-Man and the Wasp restaurant and Marvel character meet-and-greets and rooftop shows. A second phase will open at an unannounced date with an Avengers E-ticket attraction.

However, we wouldn’t be surprised if both attractions opened at the same time, depending on how many more months it will be before Disneyland and Disney California Adventure reopen their gates. Before, Disney was preparing to open the land without the main draw: the E-ticket attraction that is currently unnamed but is arguably as highly anticipated as Star Wars: Rise of the Resistance, which opened in the second phase of Galaxy’s Edge.

Read More: All About the E-ticket Ride Coming to Avengers Campus

Although construction was put on pause initially when the theme parks closed, it’s clear that construction has continued at Avengers Campus, as Disney considers this new Marvel-themed land to be a “priority project.” When the land was initially supposed to open in summer 2020, Disney likely knew that the E-ticket attraction wouldn’t be ready by then, while the rest of the land would be.

Therefore, if construction on the new land continues significantly and if we will still have to wait several months before the new Avengers Campus opens, perhaps there is a chance that the second ride will also be ready at that time. After all, we still don’t know when the Disneyland Resort theme parks will welcome Guests again, and so we don’t know when exactly the second attraction at Avengers Campus will open, either — whether it’s in a second phase or not.

Disney has not confirmed whether there are plans to open the land all at once instead of in phases. But if anything changes, we’ll be sure to update our website. For now, if you want to get excited for everything coming soon to Avengers Campus, you can read this article here.

What do you think? Is there a chance the new Avengers Campus land at Disney California Adventure will open all at once with both attractions, instead of in phases? Let us know in the comments.

Comments Off on Will Avengers Campus Open in Phases or All at Once?