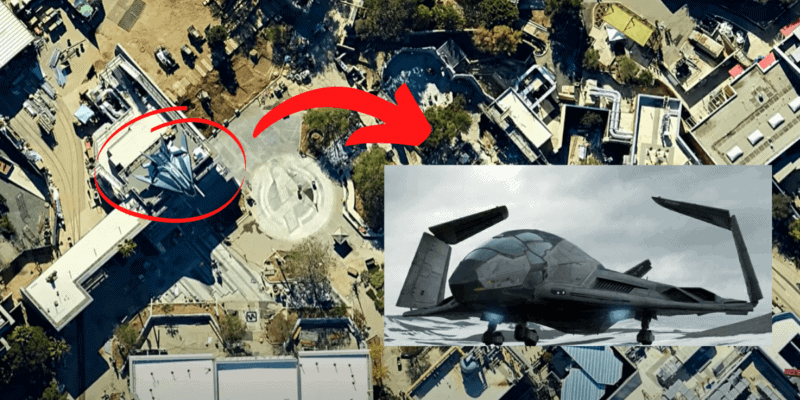 We don’t know about you, but we can’t wait to experience Avengers Campus, the all-new Marvel super hero-themed land coming to Disney California Adventure Park. So when we came across a video that shows an aerial overview of Avengers Campus construction, we knew we had to share it with our audience so you could see what all the hype is about.

Thanks to a new video by FreshBaked, we are getting an overview of Avengers Campus construction — but what does it mean, and when will this land actually open? Here’s what we know.

Like many other Disney Park, Marvel, and Walt Disney Imagineering fans, we’re incredibly hyped for the Spider-Man stuntronic coming soon. In a previous announcement, Disney shared, “Guests visiting Disney California Adventure park in the near future may be able to catch a glimpse of the friendly neighborhood Spider-Man himself swinging above the rooftops of Avengers Campus.”

Now, we think we have an idea of where the Spider-Man stuntronic will launch. Take a look at the cutout of the building rooftop in the bottom right corner of the image below. As others have pointed out, David at FreshBaked suggests that we are looking at the area from which the Spider-Man stuntronic will be launched up, out, and over a crane and into the next area of the land.

In addition, we can see what appears to be the rooftop where Avengers super hero stunt performances will take place. We know that a number of Avengers will be seen in Avengers Campus after the land opens. And, given the construction of the buildings, it looks like we know where characters like Black Widow, Captain America, and more will be performing. You can look at the aerial view below compared to the concept art, in which we see Avengers running on top of buildings in the new land.

We got an up-close view of the Quinjet thanks to Disney Parks, Experience and Products Chairman Josh D’Amaro a few months back. But seeing this aerial view makes it feel that much more real. Much like the Millennium Falcon in Star Wars: Galaxy’s Edge, the Quinjet in Avengers Campus looks so much like a film prop — it’s so believable. There’s little doubt that fans will be in awe as they meander Avengers Campus and catch a glimpse of it, especially since it hints at the E-ticket attraction coming in the future.

We also have a view of the Avengers Logo. Of course, it won’t look like this when the land is ready to open. But even seeing a faded-looking version of that famous icon is pretty amazing. Currently, as FreshBaked notes, there is a protective covering over the ground, but this will be removed when Avengers Campus debuts to Guests and the logo will look as it is intended.

It appears as though the area where Doctor Strange will greet super heroes-in-training is nearing completion. Or at least, this area is definitely taking shape. This meet and greet will not be like your typical character interaction experience. Disney promises that the Sanctum is “an ancient site, hidden for centuries,” where Doctor Strange will “open your eyes to the mysteries of the multiverse.”

If you take a look below, we get an aerial view of Sanctum, including the entrance to the experience. Guests will walk under the archway (as seen in the concept art above) to encounter Doctor Strange in what will presumably be much more of a show than a meet and greet. In taking a look at what Disney has proposed for Sanctum, we’re definitely excited to see the effects — they will surely look beautiful both during the day and at night.

We also get a view of Pym Test Kitchen — and it’s huge! David at FreshBaked points out that the building for the Ant-Man-inspired eatery and microbrewery is quite large.

“It’s difficult to compare this to a restaurant elsewhere, but that’s as big a building that you will see for a restaurant in the entire park,” David claims. “That’s going to be impressive to be inside. That’s going to be an experience, and that’s something that Disney is really good at — making your shopping and your dining experience as much an attraction as an actual attraction, especially like at Galaxy’s Edge where the shopping is the show and the dining is the show. I have a feeling this location will be very much like that, just considering the size of this restaurant.”

In the image above, we can see that the tracks go through the Avengers building (on top of which sits the Quinjet, as part of the upcoming E-ticket attraction) and into a backstage storage area.

It’s also unclear if the drop-off location for the Red Car Trolley will be inside Avengers Campus. If the trolley route will stay the same, will the theming change, as we see in the poster above? Disney hasn’t actually made any announcements of whether the trolley will be incorporated into the new land or whether it will remain themed to align with Buena Vista Street and Hollywood Land. However, we are most certainly intrigued.

Thanks to FreshBaked, you can watch the full video and analysis of the Avengers Campus construction below:

When will Avengers Campus open?

It seems to us that since the land looks to be almost complete, we could only be waiting for the Disneyland Resort theme parks to open. And perhaps, after that, we’ll get to experience Avengers Campus. The land was originally expected to open in July 2020, though, of course, the opening has been pushed back due to the pandemic and the ongoing temporary closure of the Disneyland Resort.

As soon as Disney provides any updates regarding the opening of Disneyland Park and Disney California Adventure Park — and, therefore, the opening of Avengers Campus — we will be sure to share the information on our website.

Are you excited for Avengers Campus at Disney California Adventure? Which part of the land are you the most eager to experience? Let us know in the comments!

Comments Off on Avengers Campus: Quinjet and Spider-Man Stuntronic Launch?