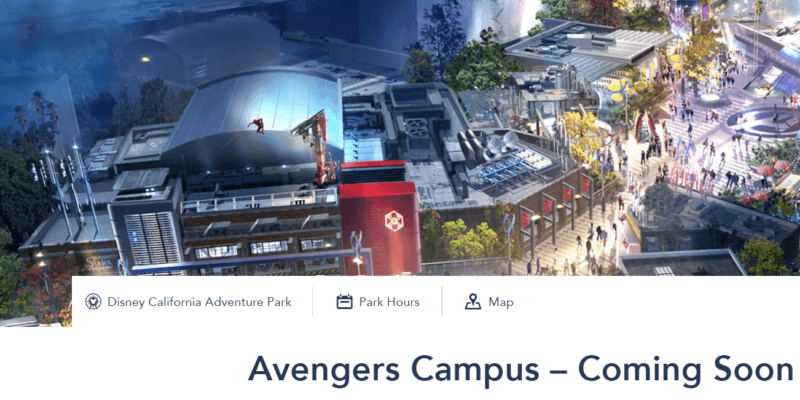 This article has been updated since it was originally published to reflect the most up-to-date information.

According to a new update to the Disneyland Resort website, it looks like Disney may be delaying the opening of the newest Marvel-themed land, Avengers Campus.

Avengers Campus is set to be the newest land coming to Disneyland Resort in southern California. It will be the first land inspired by Marvel characters in the Disney Parks in the U.S., and fans around the world are incredibly excited for its arrival at the Happiest Place on Earth.

“Avengers Campus invites you to team up with the Avengers and their allies in a fully immersive land at Disney California Adventure park. Avengers Campus is comprised of several heroic locations—each hosted by a different Super Hero or their ally—to share their unique powers, technology and knowledge with recruits,” according to Disney’s official description of the land.

At Avengers Campus, guests will be able to take learn how to sling webs with Spider-Man thanks to the Worldwide Engineering Brigade, meet and greet some of the most iconic Marvel heroes, and even see Iron Man (that’s right–Iron Man!) in a land that exists in a separate Marvel Cinematic Universe timeline from that of Avengers: Endgame.

While we don’t yet know exactly when we will get to experience this immersive new land in California Adventure at Disneyland Resort in Anaheim, California, we know it will be incredible.