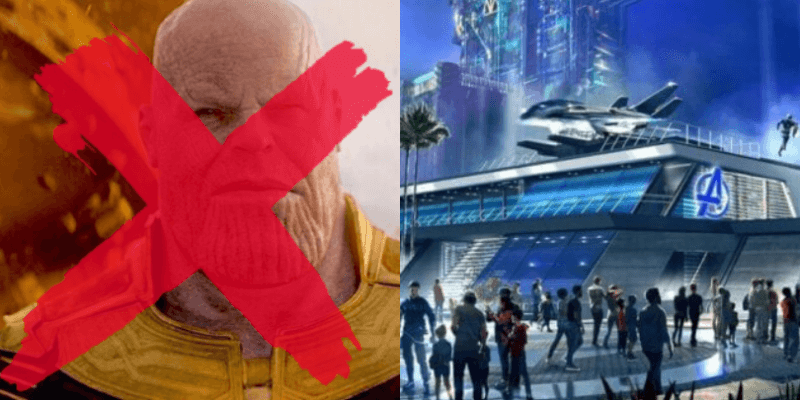 When you step into the Marvel-themed land Avengers Campus at Disney California Adventure park, you discover that our world takes its place as a part of the Marvel Cinematic Universe. But not in the way one would think, or maybe hope. Because, since Earth’s mightiest heroes now exist in our world, Thanos’s snap never happened.

Yes, it is confirmed that Avengers Campus will exist in our real-life world as one of the alternate timelines Marvel Studios is now attempting to establish — a parallel timeline to the Marvel Cinematic Universe outside of the Infinity Saga.

“So the Avengers and all of us, the guests, we’re recruits. We’re here to just have eyes on the prize there. I think that you’ll find that these events are really happening. It’s really happening. This campus exists in the real world, and therefore, those heroes are here and keep an eye on us, keep us all safe. There’s no apocalyptic snap happening in this campus.”

So not only is it an attempt to bring the Marvel superheroes into our own universe, but it actually incorporates our world into the multiple timelines that now exist within the MCU. We, the people of this particular earth, get to have a hand in writing our own chapter of the extended Marvel Universe.

While that fact should be awesome enough on its own, Marvel fans must also understand that there is an accepted dissonance between park experience and the cinematic world. Nothing in the Disney parks is an exact continuation of the cinematic world, and we have to be okay with that.

For instance, Maleficent and almost every single Disney villain die in their movie. Why would we then see them still up to no good in the parks? Because the characters are amazing, the interactions are unforgettable, and more individual adventures with the same villains can take place.

Walt Disney Imagineering made a similar story choice when it chose to incorporate Star Wars: Galaxy’s Edge into both the Disney parks and the Star Wars universe. They chose to freeze the land in time, allowing guests to explore the galaxy outpost within the last three films of the Skywalker Saga.

It will be interesting to see how Disney and Marvel choose to handle the interactions with Earth’s Mightiest Heroes at the Disneyland Resort. Yes, we will still have Tony Stark‘s Iron Man, Captain America, Black Widow, Ant Man, Doctor Strange, Spider-Man and Black Panther, but will they have the same stories to share? How will their journeys within our own Universe be different than they were in the Cinematic Universe? We already get a sense of the difference in Guardians of the Galaxy Mission Breakout, but it will soon be expanded to include Avengers Headquarters, Pym‘s Lab, a spider man adventure, “stuntronic” web slingers and more!

Either way, we can rest assured that whatever we get out of Avengers Campus at Disney California Adventure is going to “blow people away.”

Are you excited about Avengers Campus? Let us know in the comments!

Comments Off on Confirmed: How Our World Becomes Part of the MCU at Disney’s Avengers Campus