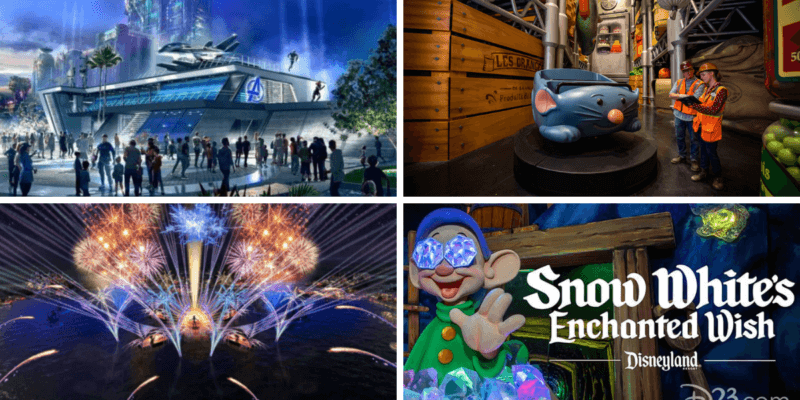 Want to know what you can expect to arrive at Disney Parks and Resorts in 2021? We’ve got you covered.

Disney has shared everything that is confirmed to open in 2021 at Disney Parks and Resorts around the world. There are plenty of construction projects still in the works — from Mickey & Minnie’s Runaway Railway at Disneyland to TRON Lightcycle / Run and the Star Wars: Galactic Starcruiser at Disney World — but there are a few big things that we know will open very soon.

Although the exact opening dates for the following projects are still unknown, we have confirmed that they are all expected to open in 2021. Here’s what D23 shared today.

Note that there may be additional new offerings coming to the Disney Parks in 2021 that are not mentioned here. This article is simply an overview of what D23 has shared that is for sure coming.

Disneyland Resort confirmed that the newly renovated Snow White’s Scary Adventures attraction — renamed to Snow White’s Enchanted Wish — will be ready to open as soon as Disneyland Park reopens sometime this year. We also know that Avengers Campus will open at Disney California Adventure in the near future. You can read our latest Avengers Campus construction update here.

While Disneyland Resort is currently closed, we are looking forward to exploring Avengers Campus at Disney California Adventure next year, where we can channel our inner Super Hero alongside The Avengers, The Guardians of the Galaxy, and more! Over at Disneyland Park, we’ve already seen a sneak peek of the renovated Snow White’s Enchanted Wish attraction, set to reopen next year.

Want to know more about what’s happening at the Happiest Plae on Earth? Here’s our guide to all of the changes occurring in the heart of the theme park, the Disneyland Hub.

Over at the Most Magical Place on Earth, Walt Disney Imagineering is preparing for a big year — 2021 marks the 50th anniversary of Walt Disney World Resort. Deemed a priority project, Remy’s Ratatouille Adventure in the expanded France pavilion at EPCOT is expected to open in 2021, along with a new nighttime spectacular.

At Walt Disney World, we’re excited to step into the future as EPCOT’s historic transformation continues, including the opening of Remy’s Ratatouille Adventure in the France pavilion! Additionally, our nights are about to be brighter with the addition of the new nighttime extravaganza, Harmonious, one of the largest nighttime spectaculars ever created.

Note that neither the new TRON attraction at Walt Disney World — TRON Lightcycle / Run — nor the new Guardians roller coaster — Guardians of the Galaxy: Cosmic Rewind — was mentioned in this D23 update. So, even though fans may expect these for the 50th anniversary of Magic Kingdom, it has not been confirmed that this attraction will open in 2021 (but Disney World has not fully disclosed what the 50th-anniversary celebrations will entail or how long they will last, either). We continue to await more news form Disney — but for now, we know that the new Ratatouille ride and EPCOT fireworks will debut in 2021.

For more information on what to expect from Disney World in 2021, read our guide.

Disney also shared an update on what Guests should expect at Disneyland Paris, where a reimagined Marvel-themed hotel and a new Cars attraction will open in 2021.

At Disneyland Paris, Disney’s Hotel New York is undergoing its largest refurbishment ever, an ambitious reimagining that will transform the property into Disney’s Hotel New York – The Art of Marvel when it reopens next year. It will be the very first hotel dedicated entirely to the celebration of Marvel art, with one of the largest publicly viewable collections of Marvel artwork in the world. If you’re headed into the parks, keep an eye out for the wheel-y cool, new Cars attraction coming to Walt Disney Studios Park, where guests will be invited on a trip to discover wacky roadside attractions and local natural wonders while meeting some fan-favorite Cars characters!

We also received a small update about the theme park milestones that will be reached all around the world:

2021 will also mark several milestone anniversaries at Disney Parks around the world. In October, Walt Disney World Resort will celebrate its golden anniversary—50 years of making magic! We’ll be joining the excitement with our D23 Collector Set Celebrating 50 Magical Years, which will be included with all new and renewed D23 Gold Memberships in 2021. Additionally, Disney California Adventure and the Downtown Disney District will be celebrating their 20th anniversaries in January, while Shanghai Disneyland will ring in its 5th anniversary in June. Hong Kong Disneyland has already started celebrating its 15th anniversary with the debut of the Castle of Magical Dreams last month, and will continue the celebrations into the new year.

Since we originally published this article, Disney executives have provided some hopeful statements regarding what’s to come in 2021.

“I’m incredibly optimistic about what 2021 and beyond is going to look like,” said Chairman of Disney Parks, Experiences Products Josh D’Amaro in an interview with USA Today. “You see people with tears in their eyes…These experiences are very meaningful – maybe even more meaningful now. When the world starts to open up and change, [visitors] will come back quickly, and we will be ready.”

The Disney Parks Chairman also noted, “I think back to 1955 when Disneyland opened. It was chaotic, and a lot of things didn’t go right…But Walt did what he needed to do and reinvented the business. I can’t help but think where we are now and the chaos of the moment. We are going to come out of the pandemic stronger – holding on to our legacy but pushing ourselves into new territories.”

Additionally, Disneyland Resort President Ken Potrock shared that he has a “glimmer of hope” for 2021. You can read more details here.

Looking to book a trip? Here’s our best advice: work with a Disney travel agent. The Authorized Disney Vacation Planners at Academy Travel are Disney Parks experts and can plan your magical vacation for the best price, all at no extra cost to you. Click here to get started!

Which of these new additions to Disney Parks are you most excited to experience in 2021 and beyond? Let us know in the comments!