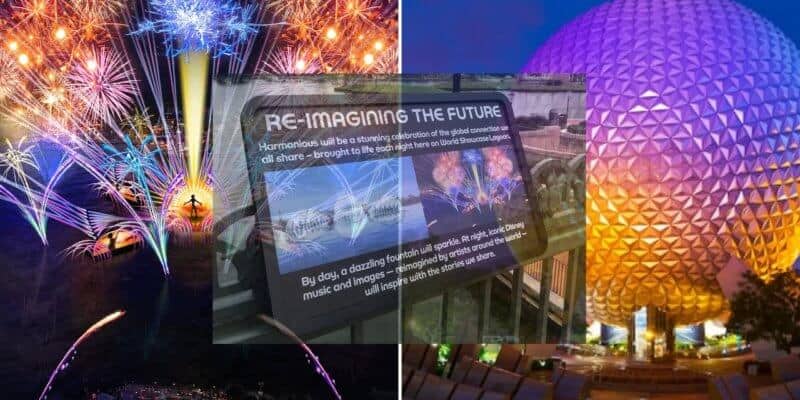 At D23 Expo in 2019, Bob Chapek announced a brand new show coming to EPCOT called HarmonioUS, which replaced the extremely popular Illuminations. During the Expo, Chapek stated it would be the “largest nighttime spectacular in Disney history.”

Want to win a trip to Disney World? Enter now!

Ever since Disney announced HaarmonioUS, they have been continuously working on getting the nighttime spectacular ready for Guests. They did have a few bumps in the road, the biggest being the current pandemic which put a pause on several different construction projects, including this one.

However, once the theme parks reopened safely to the public, Disney has resumed working on the nighttime spectacular, including installing the barges onto World Showcase Lagoon, and even began testing already! Disney also confirmed they would be testing these barges in the upcoming days as well.

Now, after seeing the barges on World Showcase Lagoon, we also noticed EPCOT install new signage around the pavilions highlighting the nighttime spectacular. As you can see in the photos above and below, the new signage reads:

Harmonious will be a stunning celebration of the global connection we all share—brought to life each night here on World Showcase Lagoon.

By day, a dazzling fountain will sparkle. At night, iconic Disney music and images—reimagined by artists around the world—will inspire with the stories we share.

This sign can be found on the bridge from the United Kingdom pavilion to France, but there are also other signs posted throughout the pavilion around World Showcase Lagoon.

At this time, Disney has not confirmed when HarmonioUS will debut, but we do know they will be testing the new barges in the coming days. Inside the Magic will continue to update you as we get information regarding the new nighttime spectacular.

Do you want to visit Walt Disney World on your next family vacation? Begin planning now!