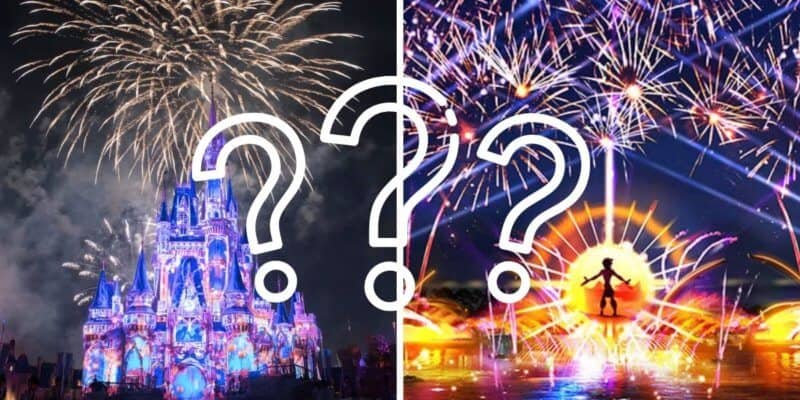 When Walt Disney World reopened to the public back in July, they announced several changes to the parks in order to keep Guests and Cast Members safe and to follow the CDC Guidelines. One of these major changes included the elimination of fireworks, parades, and select shows in order to ensure crowds would not gather in one location, which would increase the risk of the current pandemic.

However, over the last few months, we have seen Disney World making some strides with fireworks, including testing here and there, and the return of small fireworks at Magic Kingdom for the holidays. So with Disney taking these steps, it has us wondering — could Disney World bring back fireworks sooner than we expected?

Here is everything we know so far!

Disney World has announced testing on select fireworks over the last few months. Back in September, EPCOT began testing on their new fireworks show, HarmonioUS. And just today, Disney announced they would continue testing, this time on the barges for HarmonioUS, in just the next few days.

And, in mid-November, Disney World announced they would be testing fireworks at Magic Kingdom, which was followed by the debut of small, pixie dust-style fireworks for the holidays, leading us to our next point.

On November 25, Magic Kingdom surprised Guests for the holidays with the return of some fireworks! Disney confirmed that for the remainder of the holiday season, they will be showing low-level pyrotechnics, which will be set off every 15 minutes when the castle projections change.

Testing HarmonioUS – Could it Debut Without Fireworks?

At D23 Expo in 2019, Bob Chapek spoke about HarmonioUS and stated it would be the “largest nighttime spectacular in Disney history.” Walt Disney Imagineering Executive Producer Michael Hundgen also spoke out on the subject, saying, “Think of it as the latest toolkit with the latest and greatest pyro, projections, fountains, and lasers. We’re bringing it to that show. It’s sort of all the bells and whistles.”

Now, with this show having so many more elements than just the fireworks, Disney could potentially be testing the barges to still show a nighttime show, but instead only using the LED screens along with the lasers and lighting. Many suspect that this could potentially be shown all throughout the evening, similar to how Disney is projecting holiday scenes onto Cinderella Castle and Tower of Terror, rather than having one big nightly spectacular.

They also could be testing the barges for use during the day, since Disney did confirm these barges would be a permanent addition to the World Showcase lagoon, showing a new daytime show, which you can read more about here.

Increase in Capacity and Hours

Disney World has confirmed they already increased capacity at the theme parks, but also extended their hours for the holiday season — so what does this mean? Well, it is more than likely Disney is trying to entice more Guests to visit the parks.

With both the increased capacity and the extended hours, it seems as though Walt Disney World is trying to welcome more Guests and keep them in the theme parks for longer — and even into the evening when fireworks are typically shown.

Back in July, Shanghai Disney made the decision to resume its nighttime fireworks spectacular, Ignite the Dream – A Nighttime Spectacular of Magic and Light.

During the reintroduction of fireworks at the theme park, Shanghai Disneyland implemented social distancing measures prior to bringing back their fireworks spectacular so Guests could watch the show safely, which leads us to believe that this is something Disney World could also do in order to bring back nighttime shows.

We know Disney World is keen on following the CDC Guidelines; they really want to make sure their Guests and Cast Members are safe as they operate during this pandemic. Disney has stated several different times that they will continue to work closely with the CDC in order to ensure their parks are safe for visitors.

Because of this, if Disney were to bring back fireworks soon, they would have to implement health and safety measures, much like Shanghai Disney did. This could include securing a reservation prior to arrival, much like a FastPass or a Disney Park Pass, to help maintain crowd levels during these nighttime spectaculars, as well as implementing social distancing markers for Guests to provide them with designated places to stand during the fireworks or shows.

Preparing for the 50th Anniversary in 2021

There could also be a possibility of Disney wanting to wait longer to debut the fireworks until later in 2021, much closer to whenever the 50th-anniversary celebrations start and these tests could just be Disney getting way ahead of the game.

If you want to plan a trip to Disney World for the 50th anniversary, be sure to get in touch with our friends over at Academy Travel, who will be there with you every step of the way.

Please keep in mind, at this time Disney has not made an announcement on when fireworks shows will be returning to the theme parks. This is pure speculation based on what has been shared thus far. Inside the Magic will keep you updated as we get information from Disney on fireworks and nighttime spectaculars.

So what do you think? Do you think Disney is preparing to bring back fireworks or nighttime spectaculars soon? Let us know in the comments below.