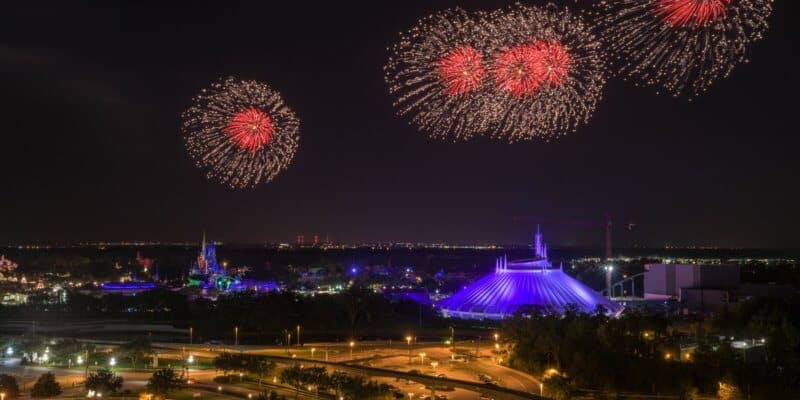 In the late hours of Monday, November 16, eyes turned on the Magic Kingdom as the Walt Disney World Resort tested their fireworks. Such a sight has not been seen by Disney fans since before the multi-month shutdown. And even though it was just a test, fans gathered round to soak up as much of the magic as they could.

We at Inside the Magic shared with our readers that the testing was going to be live-streamed and you can go watch the full video by clicking the link below.

But along with the video, several other onlookers were able to gather some beautiful pictures and we would like to share them with you.

Jonathan Salazar (IG: @thedisneypilot) shared some pictures directly with Inside the Magic. We can see the skyline of Cinderella Castle, Space Mountain, the Astro Orbiter, and even the new Tron coaster all beneath the row of fireworks.

“Last night… For the first time in eight months, a few fireworks lit up the sky above the Magic Kingdom. It was a routine test, but it was still wonderful to see.”

“Last night they did firework testing at the Magic Kingdom. It is the first time the skies above Cinderella Castle has been lit up since the closure in March.”

@disneykygirl also shared pictures and a video of the test including this one which she simply captions excitedly, “Fireworks Test Over Magic Kingdom!!”

Now, it should be mentioned that this was a routine test and there is still no word from Disney of when Guests can expect its fireworks spectacular Happily Ever After to return, but it is still a beautiful sight that many can appreciate.

In the meantime, Disney World has slowly reimplemented other nighttime entertainment such as the holiday projections on Cinderella Castle, the Tower of Terror a Disney’s Hollywood Studios and the Tree of Life at Disney’s Animal Kingdom. The only Disney fireworks to return routinely to the skies are those at Shanghai Disney Resort.

Related: Is Another Disney Park Bringing Back Nighttime Entertainment?

But if you have been craving Happily Ever After recently, click here to watch Disney’s special recording of the entire show.

Our friends at Academy Travel are also standing by ready to help you plan your next Walt Disney World Resort vacation and make it as magical as possible. Click here to get started!

When do you think fireworks will return to Walt Disney World? Let us know in the comments!