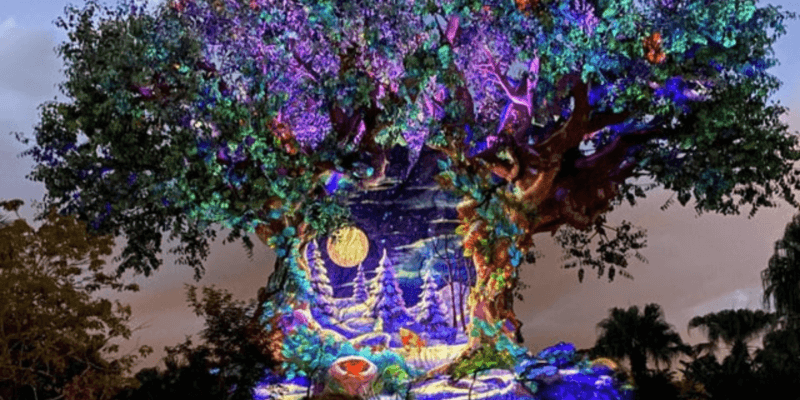 Nighttime holiday projections are continuing to appear across Walt Disney World Resort! We have confirmation that the Tree of Life at Disney’s Animal Kingdom is once again coming to life with holiday magic as the Tree of Life Holiday Awakenings projection show makes a triumphant return.

But unlike the holiday projections on Cinderella Castle at Magic Kingdom or the Hollywood Holiday Tower Hotel at Disney’s Hollywood Studios, the Tree of Life projections are only happening on certain nights.

The return of this projection show comes as a surprise to Disney World Guests since it was left out of the original modified plans announced by Disney Parks.

Disney World confirmed that Tree of Life Holiday Awakenings will be shown as a goodnight kiss around the time Disney’s Animal Kingdom theme park is scheduled to close, but only if the park remains open after sundown.

Disney’s Animal Kingdom is currently operating on shorter hours that feature a closing time on some nights as early as 5:00 pm. According to timeanddate.com, sunset begins at around 5:30 pm with the sun not going completely down until between 6:50 and 7 pm. Plan accordingly if you would like to enjoy this holiday special on your next Disney World visit.

Tree of Life Holiday awakenings is a holiday rendition of Animal Kingdom’s nightly projection show, Tree of Life Awakenings, which Walt Disney World describes on its website as the following:

Planning a holiday visit to Disney’s Animal Kingdom? Our friends at Academy Travel are standing by to help you make this next Walt Disney World Resort Vacation as magical as possible! Click here to learn more and receive your free, no-obligation quote today!

Comments Off on Surprise! WDW Brings Back Holiday Projections to More Parks