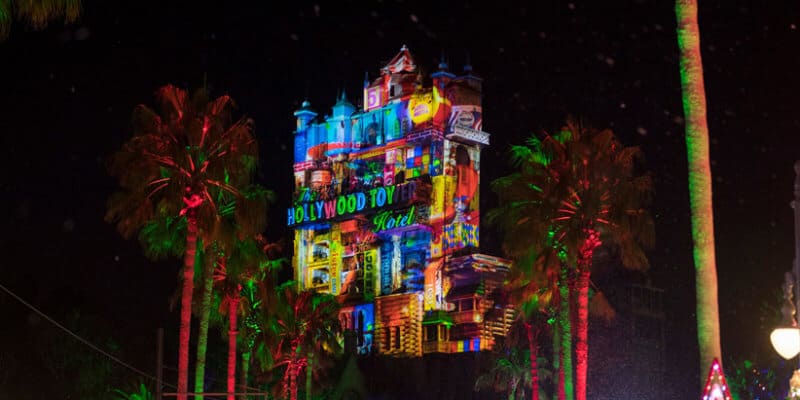 Walt Disney World Resort has a lot more magic in store as the holidays begin at the Most Magical Place on Earth. The Disney Parks Blog shared with us more festivities hitting the theme parks this month as celebrations ramp up.

Here are more details about what’s happening specifically at Disney’s Hollywood Studios, where it appears that the Hollywood Tower Hotel, home of the Tower of Terror attraction, will be gifted new projections for Christmas, becoming the  Hollywood Holiday Tower Hotel.

In previous years, the Hollywood Tower Hotel has been given projection animations for “mini-shows” on Sunset Boulevard at Disney’s Hollywood Studios. The projection collection, called “Sunset Season’s Greetings,” has included, a Toy Story series, a Mickey and Minnie Normal Rockwell-style short, the Muppet’s own Swedish Chef crafting Gingerbread, and Olaf’s holiday wishes and falling snow.

The series has traditionally run from early November until the end of the year, but for 2020, it looks like the projections will be shaken up like a holiday snowglobe. According to the Disney Parks Blog,

After dark, the iconic Hollywood Tower Hotel on Sunset Boulevard will twinkle with projection effects as it becomes the Hollywood Holiday Tower Hotel, magically transforming into a Muppets gingerbread masterpiece, a Toy Story toy hotel, a snowy corner of Arendelle and a Dickensian village inspired by ‘Mickey’s Christmas Carol.’

So while some scenes may be familiar, a few may be mixed up or tuned up. We’ll be standing among the palms and billboards, waiting for the show to begin.

Disney Guests visiting Disney’s Hollywood Studios will still get to spot Santa in a new way, instead of visiting him and Santa Goofy (after Christmas) on Sunset Boulevard. Instead, Santa gets an upgrade to a motorcade full of “glitz and glamour” in time for the holiday. A hot red convertible will tote not only Santa but plenty of Elves and presents down Hollywood Boulevard.

Guest can also expect a “For the First Time in Forever: A Frozen Sing-Along Celebration” adding “a festive finale, featuring everyone’s favorite snowman, Olaf, and celebratory songs of the season.”

Are you headed to the glossy lights and “snoap” of a Disney Hollywood Christmas? Leave us a comment about how you are celebrating at Disney’s Hollywood Studios.

Comments Off on New Projections for Hollywood “Holiday” Tower Hotel