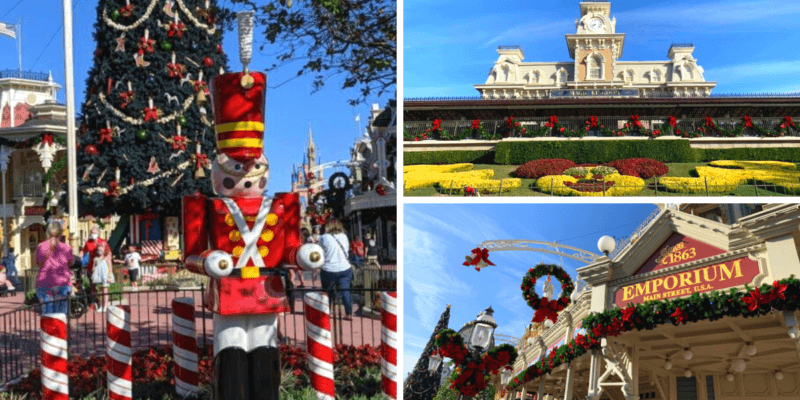 It’s the most wonderful time of the year yet again at the Walt Disney World Resort!

After a week of leaving Spooky Season behind and hauling out all the holly, Disney’s modified 2020 Christmas celebration has officially begun at Magic Kingdom Park, and we are so excited to be here to help get things started!

Your favorite characters don their holiday best and celebrate the season in a series of special cavalcades, complete with Christmastime floats and music. From Mickey and friends trimming a tree to Goofy and his pals whipping up a bakeshop full of scrumptious treats, character cavalcades bring holiday spirit to the streets of Magic Kingdom throughout the day. And keep your eyes open for Santa when he glides down the parade route in his sleigh.

Main Street, U.S.A. is the spot to catch the Holiday Trolley, bringing festive harmonies from the Dapper Dans barbershop quartet, and you may just see some Toy Soldiers joining the Main Street Philharmonic when they march through Magic Kingdom playing their merry melodies.

At night, holiday magic brings a festive look to Cinderella Castle with special projection effects, producing a kaleidoscope of designs including festive stripes and dots, a whimsical Christmas sweater look, a jeweled winter castle and a regal overlay of red, green and gold ornamentation. It’s sure to provide the perfect colorful backdrop for your holiday photos.

The transition from Halloween is complete. All of the decorations are finally up, the special holiday cavalcades are marching down the parade route, the merchandise is on display, and the seasonal goodies are fresh for the taking. And this reporter can say that there is still plenty of holiday magic to go around despite the restricting conditions.

It was just a few months ago that Disney Parks officially announced that Mickey’s Very Merry Christmas Party and the other traditional holiday festivities would be canceled and that new modified experiences would take their place. They assured us of extra-special cavalcades and even the chance to still see Santa Claus — even if it’s from at least six feet away.

More Information: 2020 Foodie Guide to the Holidays at Disney World

So, those of you planning — or thinking about planning — a visit to Magic Kingdom this holiday season, here is your first look at what you can expect to be waiting for you.

We are at Magic Kingdom for the first day of the holidays! Make sure to follow along with us for all the latest holiday news ? . . . #magickingdom #disneyworld #disneyparks #disneyholidays

We will be updating this article as we discover more and more about this modified holiday celebration, so please stay tuned to Inside the Magic either here or on our Instagram page for the latest updates throughout the day.

It is definitely beginning to look a lot like Christmas everywhere you look along Main Street, U.S.A., and the other themed lands of the Magic Kingdom. From Christmas tree displays on the Tomorrowland stage to the return of the seasonal Jingle Cruise in Adventureland, the spirit of the holidays has definitely returned to The Most Magical Place On Earth.

The holiday overlay for Jungle Cruise, Jingle Cruise, returns this year and brings Christmas decorations to this Adventureland attraction.

Character Sightings at the Magic Kingdom

Just as it’s been since the theme park reopened, all character meet and greets remain suspended and our character interactions are socially distanced be it from vantage points like the Main Street Train Station, or a character cavalcade.

Some of our favorite characters are out to say hi in their holiday best! Today is the first day of Disney’s Modified #christmas celebration at #magickingdom #goodmorning #disneyworld

Outside of the cavalcades, we are spotting several characters in the Magic Kingdom today (we will be updating this piece throughout the day so stay tuned).

Who doesn’t love #disneyprincesses dressed in their holiday finest?? ??#disneyworld

The Country Bears were spotted on Frontierland:

Holiday Cavalcades at the Magic Kingdom

Just like for Disney’s modified Halloween celebration, Magic Kingdom Guests will get some very special seasonal cavalcades that will feature some extra special characters!

Here’s what Disney Parks said we should expect for this season:

Character cavalcades at Magic Kingdom Park will take on a special holiday twist, with Christmas friends on festive floats in their holiday finest. Gingerbread Men? Check! Elves and Reindeer? Check, check! And, my personal favorite, the Toy Soldiers, will join the Main Street Philharmonic as they march through Magic Kingdom Park, bringing musical holiday cheer for all to hear.

Santa Claus at the Magic Kingdom

In its announcement of the modified festivities, Disney Parks confirmed that Santa will be stopping by saying:

Holiday magic will be in full force at the four theme parks and Disney Springs, and Santa Claus will make time for special pop-up appearances at each location, waving and exclaiming holiday wishes to all.

Related: Confirmed: Where to See Santa Claus at Disney Springs!

Thanks to shorter winter days and the end of Daylight Savings, Magic Kingdom Guests will get the chance to truly experience the Magic Kingdom at night for the first time since reopening. While there will still not be any nighttime spectaculars this season, Disney Parks announced that Cinderella Castle will still get a festive projection overlay.

If you are planning a trip to Walt Disney World during the Christmas season, our friends at Academy Travel are standing by to make this vacation as magical as possible! Click here to reach out and receive your free, no-obligation quote today!

What do you think about Disney World’s modified Christmas celebration? Let us know in the comments!

Comments Off on PHOTOS: First Day of Holiday Season at Magic Kingdom