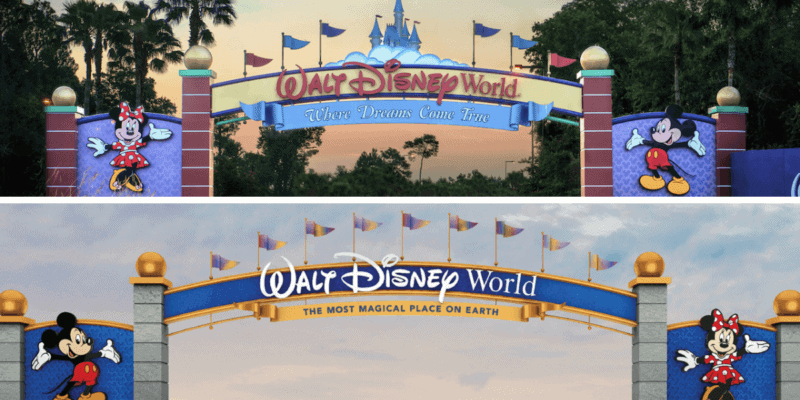 When Disney Parks unveiled the redesign for the iconic gateways into Walt Disney World Resort, they unveiled not just a new color scheme, but also a change to the slogan displayed.

Soon, the Walt Disney World entrance gates won’t say “Where Dreams Come True.” From now on, the gates will officially display what has been the official slogan for Disney World: “The Most Magical Place on Earth.”

Related: Why You Should Visit Walt Disney World Right Now

Now, in most circles and even on this site, both slogans have been used relatively interchangeably. After all, all Disney Parks are the places “where dreams come true.” But since Walt Disney World Resort has been known as “The Most Magical Place On Earth,” it makes sense for Disney to make the slogan swap on the gates to enter Disney World property.

Disney Parks overall has been known as “Where Dreams Come True,” actually, for over 10 years now.

According to a Walt Disney Company press release dating back to 2006,

Disney Parks announced today a global initiative, “Where Dreams Come True,” which will unify its global efforts like never before and go to the very heart of what makes Disney Parks unique. Incorporating key insights from the successful Disneyland 50th anniversary, this new organizing principle will usher in a new era of broader global marketing and guest customization at Disney Parks and will be highlighted by Disney’s “Year of a Million Dreams” celebration.

“Where Dreams Come True” will be Disney’s first-ever initiative that fully integrates and encompasses its entire global portfolio of parks and resorts. It is rooted heavily in consumer insight – gained through two years of extensive research around the world – that reveals a singular view of Disney Parks. …

…The ideology of “Where Dreams Come True” will permeate virtually every consumer touch-point, beginning with the vacation planning process and continuing during the Disney Park vacation experience through to the return home. Consistent global messaging and visual iconography will be centered on the universally understood principle of dreams to ensure emotional resonance with audiences around the world.

As the Walt Disney World Resort nears its own 50th Anniversary Celebration, it will now have a proper entryway letting all of its Guests know that they are entering The Most Magical Place On Earth, a slogan unique to Disney World in Florida.

Planning your trip to The Most Magical Place On Earth? Our friends at Academy Travel are standing by to help you make this Walt Disney World Resort vacation as magical as possible!