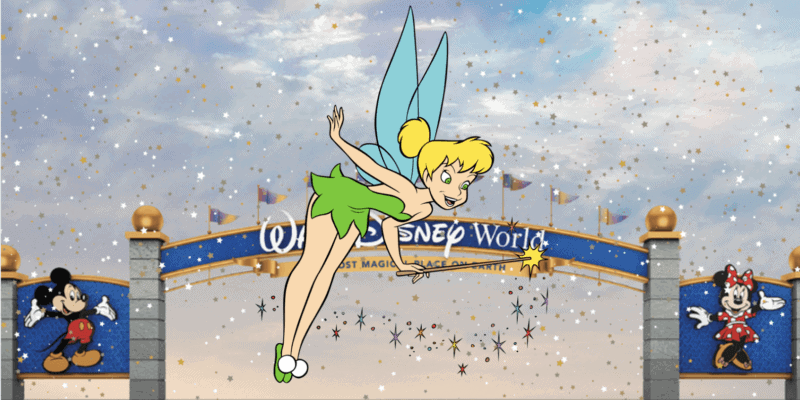 Today, Disney Parks Blog announced that Walt Disney World Resort’s famous entry arch is about to get even more magical — thanks to a coat of fresh paint!

Once completed, the famous Walt Disney World Resort sign will closely match the recent royal makeover of Cinderella Castle at Magic Kingdom Park. Below, you can see the concept art of what the sign will look like!

For comparison, this is the concept art of Cinderella Castle’s new paint job that was released prior to the transformation:

In Disney’s official announcement [shared in full below], the updated WDW entry arch design will take a cue from Cinderella Castle’s new colors — this means you shouldn’t be surprised if the company has decided to “make it pink, make it blue,” just like in Sleeping Beauty.

Starting today, these gateways to a Disney vacation are about to get some pixie dust as we begin to adorn them with a new color palette that complements the recent royal makeover of Cinderella Castle at Magic Kingdom Park. The rendering above gives you a first glimpse at what the entrances will look like when they’re finished; in addition, you’ll see these colors appear on the Magic Kingdom Park Auto Plaza as we bring a new shimmer to that iconic entryway.

These refreshed gateways will continue to set the tone for all the stories you’ll tell and the memories you’ll cherish long after your visit. They’re also part of the broad tapestry of new experiences happening across Walt Disney World as part of the resort’s historic transformation that includes expansive themed lands like Star Wars: Galaxy’s Edge, new attractions like Mickey & Minnie’s Runaway Railway, and new places to stay like Disney’s Riviera Resort.

The main entrance isn’t the only Disney World signage to get a new look recently. Magic Kingdom’s toll booth plaza is also getting refreshed — with royal blue and rose gold paint — ahead of the theme park’s 50th Anniversary Celebration in 2021!

Although Disney hasn’t confirmed many details about The Most Magical Celebration on Earth yet, we know that certain priority projects, such as Remy’s Ratatouille Adventure — part of EPCOT’s massive reimagining — and the TRON Lightcycle Power Run roller coaster in Tomorrowland, are supposed to be completed before the party starts.

Even though a visit to Walt Disney World Resort doesn’t look quite the same now as it did a year ago as a result of the coronavirus pandemic, it is wonderful to see that Disney is still doing everything they can to give families the pixie-dusted experience they’ve come to expect (and cherish!) every time they come to The Most Magical Place on Earth.

Will you be at Disney World for the 50th Anniversary next year?