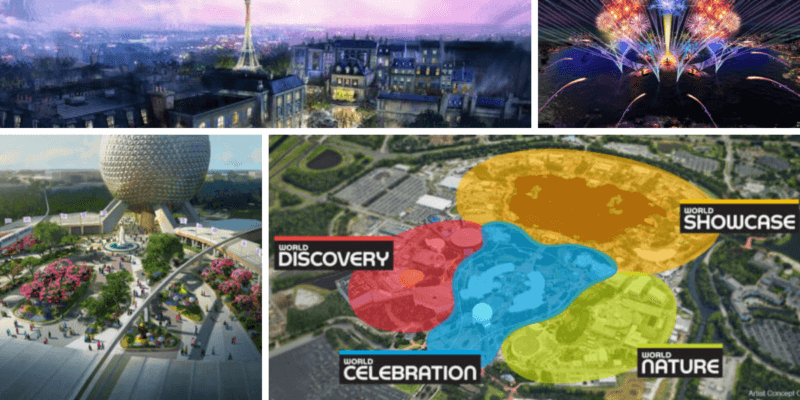 At the 2019 D23 Expo in Anaheim, California, The Walt Disney Company announced that Disney World’s EPCOT theme park — the brainchild of Walt Disney himself — would be undergoing a massive reimagining.

Even those who consider EPCOT their favorite of Disney World’s four theme parks largely agreed that updates were needed to carry the park, which opened on October 1, 1982, fully into the 21st century.

One of the biggest D23 announcements last year was that EPCOT would be divided into four neighborhoods — the existing World Showcase and three new sections, World Celebration, World Discovery, and World Nature.

Before construction on most of EPCOT’s many construction projects could get underway, the coronavirus pandemic hit, leading to the unprecedented closure of Walt Disney World Resort.

The pandemic, as all Disney Parks fans know, threw a wrench into Disney’s plans for the EPCOT reimagining. Here, we take a look at what’s still happening, what projects have been put on hold, and how much the theme park is actually likely to change before Walt Disney World’s 50th Anniversary in 2021.

The EPCOT entrance area concept art that debuted at D23 showed numerous changes, including the addition of widened pathways, colorful gardens, and a fountain focal point in front of Spaceship Earth.

The EPCOT entry overhaul is actually expected to continue basically as planned, except for the now-postponed Spaceship Earth refurbishment. Spaceship Earth was originally supposed to have brand new narration and updated scenes, including a revamped Egypt scene [concept art pictured below].

To date, the “Walk Around the World” bricks and “Leave a Legacy” monoliths have been removed and stunning new entrance pylons have been installed, giving EPCOT Guests a glimpse of what is to come as the entrance area transformation continues.

As you can see in the map above, World Celebration will encompass Spaceship Earth and the vibrant new entrance area, although the bulk of the area will be behind the geosphere, as seen in this Disney concept art.

Disney Parks officials have described EPCOT’s new World Celebration neighborhood as a place where Guests can explore “new experiences that connect us to one another and the world around us.”

Originally, the area was set to be anchored with a multi-tier Festival Center, which has now been put on hold. At D23 2019, then-Disney Chairman of Parks, Experiences and Products Bob Chapek — who is now CEO of The Walt Disney Company — described this structure as “the perfect place for live events.”

At this time, is not known if Disney Imagineering has completely scrapped the Festival Center or if a smaller structure will take its place.

Another World Celebration highlight that, as far as we know, is moving forward is Dreamer’s Point. This area of the new EPCOT neighborhood is set to pay homage to Walt Disney, the original dreamer.

The relaxing area will feature a statue of Walt where countless photographs will undoubtedly be taken.

Disney has described World Discovery as a place where “stories about space, science, technology and intergalactic adventure come to life.”

The PLAY! Pavilion is set to be one of the major draws of Guests of all ages in the new World Discovery neighborhood. This has been described by Disney Imagineer Zach Ridley as:

“Built on the power of play, it introduces an immersive and interactive ‘city’ where you can explore, create, and interact with some of your favorite Disney characters. This is an experience worthy of our bold vision for Epcot – and another signature element of our transformation.”

While we don’t know a lot for sure about the PLAY! Pavilion yet, we do know that it will heavily feature The Incredibles’ Edna Mode — she will even lead Guests on a quest to rid the world of bad style — and there is a reported Huey, Dewey, and Louie water balloon attraction as well.

Work has been steadily progressing on the PLAY! Pavilion, which looks to be on-track for a Disney World 50th Anniversary debut. The inside of the new EPCOT area, seen in the rendering below, strongly resembles The Internet from Wreck It Ralph 2: Ralph Breaks the Internet.

World Discovery is also set to feature the brand-new Guardians of the Galaxy: Cosmic Rewind roller coaster, which is currently under construction and also appears to be on track for a 50th Anniversary reopening date.

Disney has not confirmed when this ride will open to Guests, but work is progressing on a regular basis. This will be the first Marvel-themed ride at Walt Disney World Resort. The Twilight Zone Tower of Terror at Disneyland Resort in California was rethemed as Guardians of the Galaxy: Mission BREAKOUT! in 2017 and now features Rocket, Starlord, and the rest of the Guardians crew.

One final addition to the World Discovery neighborhood is the Space 220 restaurant in the Mission: SPACE pavilion. This interstellar themed restaurant will make Guests feel as though they are dining in the middle of outer space. Although this project was delayed due to the pandemic, it is expected to open in the near future and the sign has been installed.

Disney has described the new World Nature neighborhood as a place dedicated to “understanding and preserving the beauty, awe and balance of the natural world.” The existing The Land pavilion and The Seas with Nemo & Friends pavilion will both be incorporated into this area.

The primary attraction that has been announced for the World Nature section is Moana: A Journey of Water. This will not be a ride, but an interactive, walk-through attraction in which Guests will interact with moving, “living” water.

Disney has not made any specific announcements related to Imagineering’s first Moana-themed Disney Parks attraction. We may assume it is on track for its scheduled 2021 opening date — Disney has confirmed all other attractions that will not be debuting as originally slated. But there haven’t been any updates regarding this attraction recently so we are still awaiting more confirmation.

The World Showcase will remain largely as it is now from a logistics standpoint. All of the existing country Pavilions — Canada, Great Britain, Morocco, Germany, China, Japan, France, Italy, the United States, Norway, and Mexico — will be kept.

Disney described the updated EPCOT World Showcase as “a celebration of culture, cuisine, architecture, and traditions – infused with new magic.”

Some Pavilions will be undergoing changes to enhance the overall Guest experience. The France Pavilion has seen the most construction work lately, with the new Remy’s Ratatouille Adventure ride — based on the popular Ratatouille: The Adventure at Walt Disney Studios at Disneyland Paris — apparently nearing completion.

The France Pavilion expansion is also set to include an authentic crêperie with desserts by celebrity chef Jérôme Bocuse.

One postponed project that had many Disney fans upset was the proposed Mary Poppins Cherry Tree Lane area that was supposed to be coming to the World Showcase’s Great Britain Pavilion. At this time, those who love the classic Disney movie will have to keep waiting to see if Cherry Tree Lane becomes part of EPCOT in the future.

The concept art for the new addition to the Great Britain area looks amazing, so we certainly hope this part of EPCOT’s overhaul eventually gets completed!

Finally, EPCOT is set to debut a new nighttime fireworks spectacular in the World Showcase neighborhood. Called HarmonioUS, this fireworks show will replace Illuminations: Reflections of Earth and the short-lived EPCOT Forever — the latter of which was derailed by Walt Disney World Resort’s temporary closure.

Construction teams have been hard at work on HarmonioUS lately, with barges for the show appearing at EPCOT and fireworks testing taking place. Disney has not announced an official start date for HarmonioUS, but the ode to Disney music and how it resonates with people around the world should be ready to go when nighttime spectaculars return from the looks of things.

In short, although many projects at EPCOT have been delayed or, perhaps, scrapped — we do not know the exact futures of Cherry Tree Lane and Spaceship Earth, for instance — it is clear that Walt Disney Imagineering and Walt Disney Company executives are doing everything they can to continue bringing their new vision for the EPCOT theme park to life.

If you have plans to visit for Disney World’s 50th Anniversary next year, you are sure to be in for a treat as you peruse the offerings in all of EPCOT’s four incredible, immersive neighborhoods.

Allow the expert team at Academy Travel to help you plan every detail of your next magical Disney vacation!