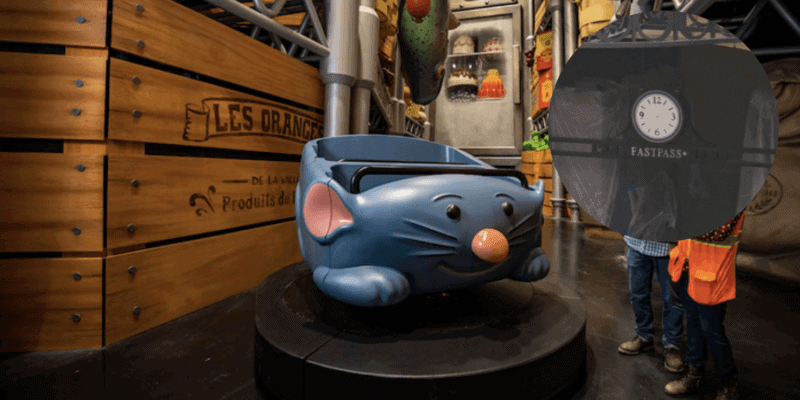 Now, Twitter user @bioreconstruct has confirmed that these two options will be available. In the following photo, a “Single Riders” sign and a “FastPass+” sign have been installed on the Remy’s Ratatouille Adventure entrance.

A Citizen branded analog Fastpass+ clock seems to be coming to Remy’s Ratatouille Adventure at EPCOT.

While this might not seem like major news in and of itself, the installation of these signs actually portends something very important for Walt Disney World Resort Guests. During the theme park resort’s phased reopening following its temporary COVID-19 closure, FastPass+ and single rider options remain suspended.
The fact that Remy’s Ratatouille Adventure will offer these two lines indicates that Disney Parks officials intend to bring them back at some point.

We aren’t sure if FastPass+ will return in time for Walt Disney World’s 50th Anniversary Celebration next year, when larger-than-normal crowds are expected to want tickets through the Disney Park Pass System, but Inside the Magic will keep you updated as we get new information.

Related: Say ‘Bonjour!’ to Remy in This Ratatouille Ride-Through

Remy’s Ratatouille Adventure, which is based on the popular Ratatouille: The Adventure ride at Disneyland Paris, is expected to open soon and is part of the World Showcase France Pavilion’s refurbishment, which is, in turn, part of the larger EPCOT theme park reimagining.

Walt Disney Imagineering is hard at work developing a new attraction for the park’s France pavilion, Remy’s Ratatouille Adventure, planned to open in summer 2020. Based on Disney and Pixar’s hit film, “Ratatouille,” this family-friendly attraction will invite you to shrink down to the scale of a rat for a culinary adventure with Chef Remy.

You’ll race across Gusteau’s kitchen floor aboard special trackless ride vehicles, which you can see in the image at the top of this post – just released today – as Disney Imagineers work on bringing this attraction to life.

Are you excited that you’ll be able to use Single Rider and FastPass for Remy’s Ratatouille Adventure?