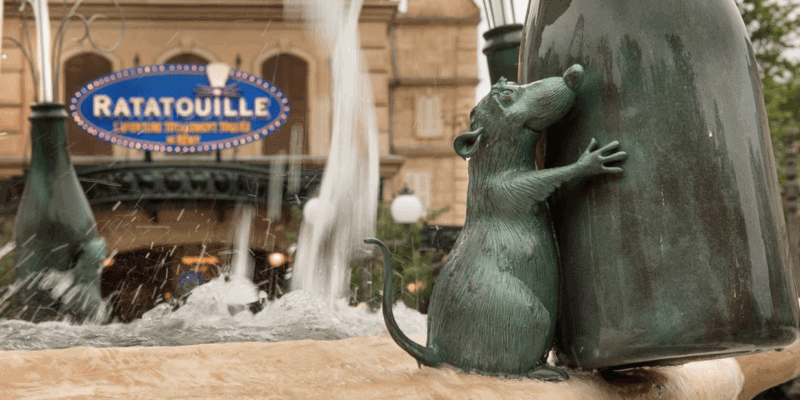 If you’re like a lot of Disney Parks fans, you were thrilled when you heard that Remy’s Ratatouille Adventure was coming to Walt Disney World Resort’s EPCOT World Showcase.

Fittingly, the new ride, which is already popular at Disneyland Paris, will be in the France Pavilion.

Based on Disney and Pixar’s “Ratatouille,” this immersive experience “shrinks” you down to the size of “little chef” Remy and sends you scurrying through the kitchen of Gusteau’s restaurant.

In this new “Ride & Learn” video, you can virtually experience this 4D attraction and discover all sorts of fun facts – like the actual size of the giant fish you whiz by, or the names adorning some of the oversized bottles in Gusteau’s kitchen.

Spoiler alert: As it turns out, the fish in Gusteau’s kitchen is 25 feet long!

Watch the video below for more fun facts.

Pull your tails in and feast your senses on this brand new 4D experience at Disney Ratatouille. Remy and friends have cooked up a delicious storm. But it’s not long before they and you are discovered by Chef Skinner, who chases you through the sights, sounds and smells of Gusteau’s famous Parisian restaurant. New for 2014, this is a Disneylicious adventure that’s sure to leave you hungry for more.

Having had the opportunity to ride the Disneyland Paris version of the Ratatouille ride, I can attest to just how much fun it is! EPCOT Guests have a lot to look forward to when the ride opens, presumably before Walt Disney World’s 50th Anniversary Celebration in 2021.

The ride’s queue features a talking Gusteau sign and Parisian buildings that transport you to a Paris street, even though you’re more than 30 minutes away from the city in reality! Disney World visitors can expect a similar look in the Remy’s Ratatouille Adventure queue.

The outside of the Disneyland Paris Resort Ratatouille: The Adventure attraction features classic Parisian architecture that will fit right into the existing France Pavilion.

Are you looking forward to riding Remy’s Ratatouille Adventure when it opens at EPCOT? What do you think about the virtual Ratatouille ride along video?

Comments Off on Say ‘Bonjour!’ to Remy in This Ratatouille Ride-Through