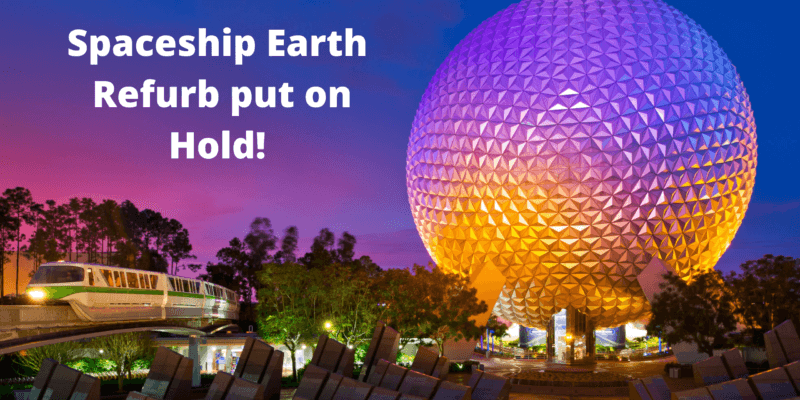 It’s been confirmed: the refurbishment of EPCOT’s Spaceship Earth has been put on hold as Disney focuses efforts on getting its theme parks operational again starting on July 11th.

The announcement reads, “Time travelers, take note that the iconic Spaceship Earth attraction at EPCOT will also continue to be available in its current state while we pause on its planned refurbishment.”

Related: Read up on changes to Disney attractions and experiences when the reopen in July

This goes against what was spotted in the My Disney Experience App a few weeks ago when the app stated that the attraction was closed for refurbishment.

The attraction was due to be getting a huge makeover in time for Epcot’s 40th birthday in 2022 but it is looking incredibly unlikely that any refurbishment of Spaceship Earth will be complete before that year now.

Fans will have to wait and see what the Imagineers have in store for the flagship icon of Epcot but with no new date for when refurbishment is set to begin, we could be stuck with the current iteration for quite some time.

Despite the Spaceship Earth attraction having a few issues, it is still one of the best attractions at Walt Disney World and we’re pleased that we can ride it at least one last time before it changes.

While not surprising, it is a shame that the high update that Spaceship Earth was set to receive has been delayed. Many Disney fans think the attraction is in desperate need of an update given that many of the audio-animatronics do not function as they originally did, and the attraction tends to leak when there is heavy rain. There’s also that issue with the ride vehicle. These issues have resulted in the temporary closure of Spaceship Earth on more than one occasion.

Still, as a huge EPCOT fan (it’s my favorite theme park in the world), I for one am very happy to see that Disney is giving fans a chance to say goodbye to the ride before it changes forever — thank the Phoenicians!

A reminder that EPCOT reopens on July 15, and while Halloween parties have been cancelled at the Magic Kingdom, the Food and Wine Festival at EPCOT is proceeding (albeit with a few changes) at the park this summer.

Are you happy about the refurbishment being delayed? Let us know in the comments below!