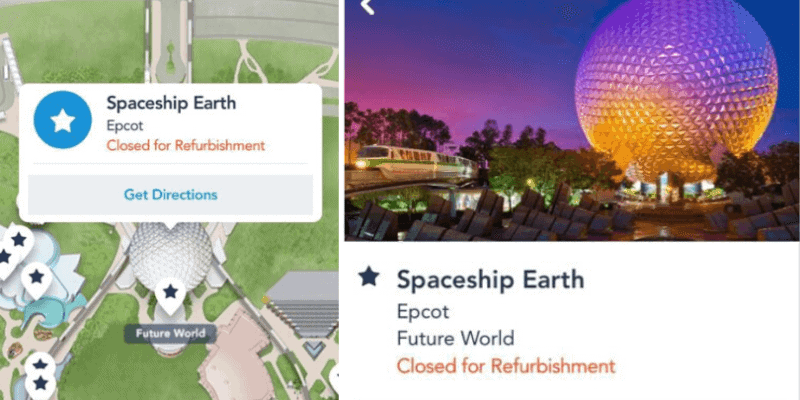 Yesterday was supposed to be the last day Walt Disney World Resort guests could ride Spaceship Earth at EPCOT. And as of today, the attraction is officially showing as Closed for Refurbishment on the My Disney Experience App and Walt Disney World official website.

Many fans have been wondering if the refurbishment of Spaceship Earth would be scrapped due to budget cuts. Disney CEO Bob Chapek even shared recently that Disney Parks and Resorts would have to make some cuts to projects that were in the works. But it looks like the Spaceship Earth refurbishment (which Disney shared would include a massive overhaul and update of the attraction) will begin. At least, it could begin once construction crews return to EPCOT and the rest of Walt Disney World Resort.

However, it’s important to note that Disney has not shared any updates regarding the construction projects that were underway when the parks closed or the ones that were scheduled for this year. And after Chapek gave his most recent update regarding projects at the parks, it is unclear which projects will still be in the works at Disney Parks and Resort and which ones will have to get cut due to finances. And although rumors suggested that the Spaceship Earth overhaul (which was projected to take years to complete) would be one of the major projects getting cut, nothing has been publicly confirmed by Disney.

We, like many Disney World fans, can’t wait to ride Spaceship Earth again, no matter when that may be. We will stay up-to-date with Disney’s official plans for reopening the Disney World theme parks, which should be announced tomorrow.

Do you have a favorite memory or experience while riding Spaceship Earth? Share it with us in the comments!