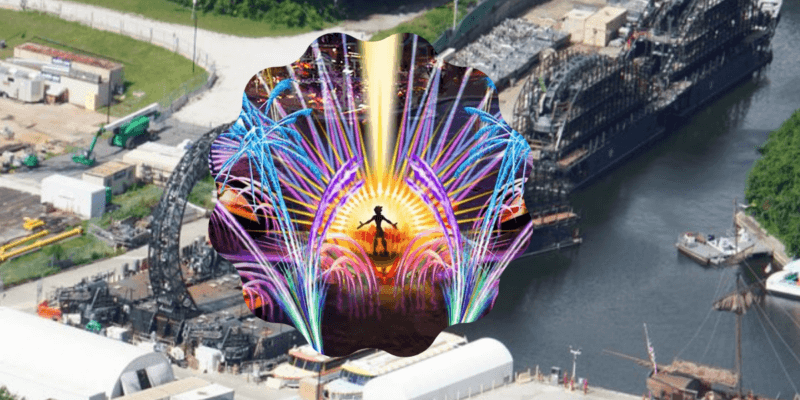 Today we have new photos of the barges that will be used to bring EPCOT’s new nighttime spectacular, HarminioUS to life!

Previously we reported on the progress being made in preparations for this brand new nighttime show. Today we have many photos to share with you of the barges that are currently being finished and prepared for the show.

Here is an in-depth look at the barges thanks to @bioreconstruct on Twitter,

@bioreconstrcut claims there are 7 barges currently under construction. These barges look massive! We cannot wait to see the finished product when the HarmonioUS show debuts at EPCOT.

Aerial view of 2 of 4 similar barges of the new EPCOT HarmonioUS night time show. At center of these barges are rotating arms with lighting and effects. The semicircular sides of these barges will have video screens. pic.twitter.com/PViwm7xUhx

Here is a great look at the featured barge that will be the center of all the action during the HarmonioUS show,

Aerial view of the circle element that will be center of the new EPCOT HarmonioUS show. It seems like a network of water pipes is in the structure, for images projected on a water screen. Note also the adjacent barges with 4 arms that will have lighting and effects. pic.twitter.com/QgvTNMDycM

And, here is another look at both the center element and the other barges.

Read all about the LED screens on the barges, and what else could be coming to the HarmonioUS show here.

Aerial view of the 7 new barges being built for the new EPCOT HarmonioUS night time show. Video will be on screens either side of the 4 barges at right. It's not yet apparent how images will be seen in the circle; possibly a water screen. pic.twitter.com/4sX3YJnbzI

Lastly, a look at what a completed LED screen on one of the barges looks like!

Aerial view of a nearly complete video screen of a barge in the new HarmonioUS show at EPCOT. There are 4 of these barges, video screens each side. At center of each barge is a rotating arm with lighting and effects. pic.twitter.com/04ddydNDMy

WOW! So many great photos that show off just how spectacular this new nighttime show coming to EPCOT will be.

The barges are not the only thing nearing completion for HarmonioUS. Just last month we reported on fireworks being tested at EPCOT. Since the reopening of the Walt Disney World Resort, the theme parks have not enjoyed any fireworks displays. We hope this could be a sign of fireworks gearing up to make an appearance at the Disney Parks again soon, but cannot be certain until Disney confirms.

As of right now, Disney has not announced an opening date for HarmonioUS, we will continue to monitor and update you on the construction progress for this exciting new show.

Are you excited for HarmonioUS? Let us know in the comments!

Want to see HarmonioUS as soon as it debuts at EPCOT? Let our talented team of travel agents assist you in planning a magical Disney vacation for the whole family!