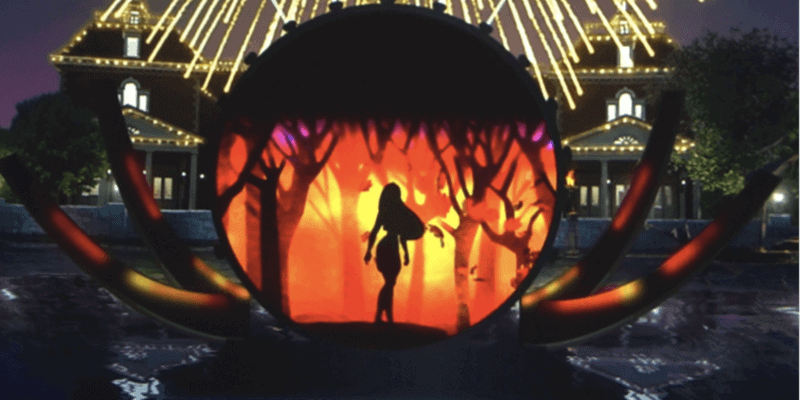 When Disney announced EPCOT’s new nighttime spectacular at the 2019 D23 Expo, the show, titled HarmonioUS was set to debut in May 2020 following the limited run of EPCOT Forever.

The pandemic, however, changed most of The Walt Disney Company’s 2020 plans, including this one. Instead of premiering in the spring as anticipated, work still continues on HarmonioUS and all of Disney World’s nighttime spectacular fireworks shows remain temporarily suspended for social distancing purposes during the phased reopening process.

Disney fans who are looking forward to HarmonioUS will be excited to see, though, that progress is continuing to move forward on many of the elements that will be used in the upcoming nighttime show. Twitter user @bioreconstruct shared a new EPCOT HarmonioUS update today.

Center screen raised upon a barge for new HarmonioUS show. Spotlights can be seen on perimeter, matching art in EPCOT Experience. Is it ringed inside with water nozzles for a circular projection screen? Consider the effect of wind on flat video screen this height. pic.twitter.com/7a9IUN1d15

The caption on the aerial EPCOT photo reads:

Center screen raised upon a barge for new HarmonioUS show. Spotlights can be seen on perimeter, matching art in EPCOT Experience. Is it ringed inside with water nozzles for a circular projection screen? Consider the effect of wind on flat video screen this height.

The responses to @bioreconstruct’s update showcased some Disney fans’ concerns about the upcoming show.

@BrianBdp wrote, “*still* unsure after all this time,” while @AmusementInside noted, “Ugh water screens were cool on Poseidon and then they should’ve moved on to another idea.”

Finally, @allioop08 said, “I wonder what the maximum wind speed is that the screen can handle. Also, sideways views of this are going to suck.”

With all of the testing that Disney’s Imagineering and construction teams are putting in on HarmonioUS, hopefully any and all kinks have been worked out prior to the new nighttime spectacular’s debut. This will be the largest nighttime show ever created for a Disney Park and it is intended to show how Disney music inspires people around the world.

Disney has not announced when Walt Disney World Guests will be able to see HarmonioUS for the first time. However, fireworks testing recently took place, giving Disney Parks lovers a glimpse of what to expect!

Are you excited to see HarmonioUS when it debuts at EPCOT? Do you think the latest Disney World nighttime fireworks spectacular will be ready before the theme park’s 50th Anniversary Celebration?

Plan your next magical Disney vacation with the help of Academy Travel. Their expert team will help you navigate every detail of the planning process, from making Disney Park Pass reservations to choosing a Disney Resort hotel. Contact Academy Travel today for a no-obligation quote.

Comments Off on Progress Continues on EPCOT’s HarmonioUS Fireworks