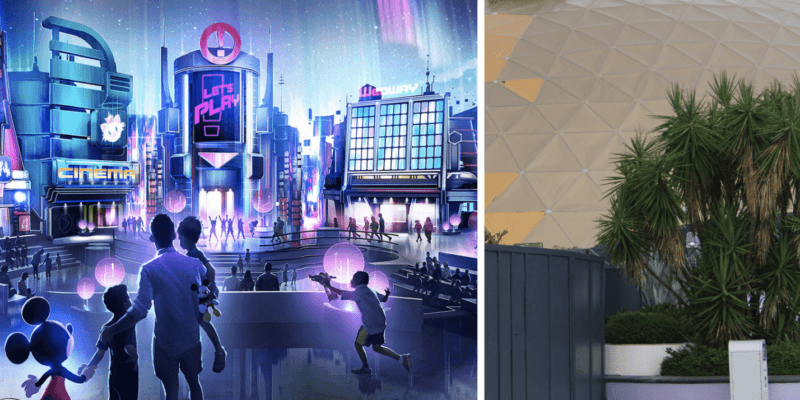 At the 2019 D23 Expo, news broke that Walt Disney World’s EPCOT theme park would be undergoing a major transformation over the next several years.

This included overhauling the Future World area to include three new neighborhoods: World Celebration, World Discovery, and World Nature. The ever-popular World Showcase pavilions will remain, with some updates, such as the Remy’s Ratatouille Adventure ride in the France Pavilion.

During Disney World’s temporary closure earlier this year, inevitable changes and delays occurred at EPCOT. Now, however, progress has resumed on many projects, including the Play! Pavilion that will be part of the new World Discovery area.

On Twitter, @bioreconstruct shared two photos of exterior progress on the Play! Pavilion’s roof, which is reminiscent of the look of Spaceship Earth.

Rumored to look something like The Internet metropolis from Wreck-It Ralph 2: Ralph Breaks the Internet, the Play! Pavilion will be an interactive experience for EPCOT visitors of all ages.

While not too many details have been released about Walt Disney Imagineering’s new playground, a couple of attractions have been confirmed: Hotel Heist, an interactive game featuring Nick Wilde and Judy Hopps from Zootopia and Animation Academy, in which The Incredibles’ Edna Mode will teach Guests to draw various Disney characters. A monorail attraction is also expected.

There have also been rumors of a Vanellope meet-and-greet and a Huey, Dewey, and Louie themed attraction. At this time, Walt Disney Company officials have not announced that the opening of the Play! Pavilion will be delayed. It is expected to open by Summer 2021.

If you are a Disney World fan, you know that 2021 is the Florida theme park’s 50th Anniversary. While celebrations are likely to be scaled back to some degree, it seems that the Play! Pavilion will fully replace Wonders of Life sometime during the Disney resort’s Golden Anniversary.

Are you looking forward to taking your family to the EPCOT Play Pavilion?

If you are interested in planning a trip to Walt Disney World, let our friends at Academy Travel help you! They will help you navigate the Disney Park Pass system to make sure you get to visit all of your favorite Disney parks, including Magic Kingdom and Disney’s Hollywood Studios. Contact their expert team today for a free quote.

Comments Off on Play! Pavilion Construction Progresses at EPCOT