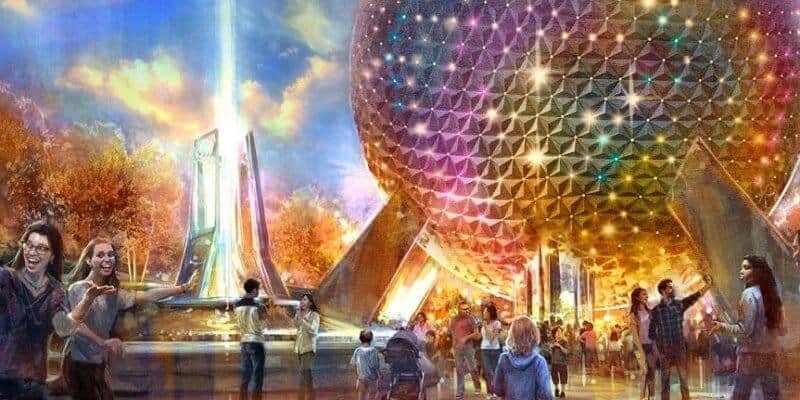 Save for uncertainty, nothing is certain in the Disney universe right now when it comes to closures and construction. From Hong Kong Disneyland Resort reopening then closing again, to Disneyland Resort’s delayed reopening, to some Guest confusion about Disney face mask guidelines, it seems that Disney Parks Guests are experiencing new changes on a daily basis as we navigate the new normal.

Now, the reimagining of EPCOT theme park at Walt Disney World Resort has been hit with major changes. Earlier today, we reported that two major projects have been put on-hold. The Mary Poppins Cherry Tree Lane attraction in the World Showcase and the renovation of Spaceship Earth have both been suspended for the time being.

This evening, Disney confirmed that the new World Celebration neighborhood in the former Future World area will also be altered from its original design. World Celebration was slated to feature a festival pavilion that Disney Parks officials described as:

This new pavilion will be the perfect place for live events, and the home base for Epcot’s signature festivals. It will provide a stunning elevated view of the entire park and an ideal spot to witness Epcot’s nighttime spectacular. This beautiful three-level structure will have one of the most remarkable architectural designs at any Disney park, featuring a plaza level, a middle expo level, and a park that sits in the sky on the top level.

Disney has confirmed that the company will now be taking a different approach as they continue to develop the World Celebration shopping, dining, and entertainment area. At this time, we don’t yet know what those new plans will entail, but as fans we are excited to find out.

There has not been an update on other aspects of the EPCOT reimagining that was announced at last year’s D23 Expo, including the opening date of the Space 220 restaurant, the PLAY! Pavilion, and the Moana water attraction.

However, the new Ratatouille ride in the France pavilion is expected to open on schedule before Disney World‘s 50th Anniversary Celebration in 2021.

What do you think about this EPCOT World Celebration update? Are you looking forward to the reinvented EPCOT theme park?