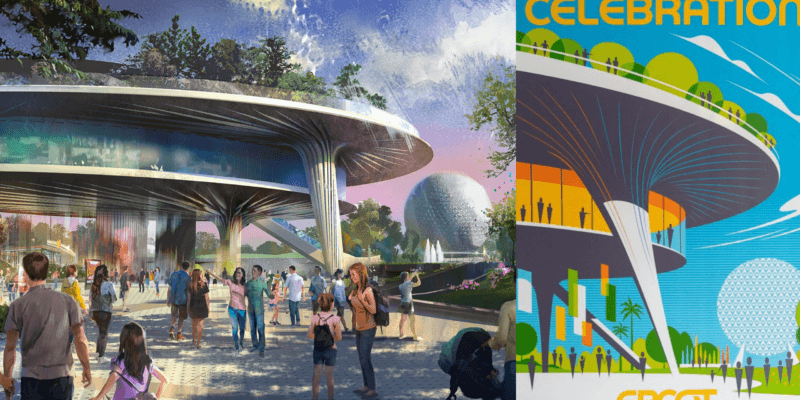 It would appear that further changes to the EPCOT updates could be on the horizon as this morning a shopDisney release was changed to omit one of the key posters that fans were expecting to see in the release.

A set of four posters was reduced to three with the World Celebration Festival Center having been completely removed from the collection.

The new collection included posters for Harmonious, IllumiNations: Reflections of Earth and the Millennium Celebration but there was no sign of the Festival Center despite the collection being named ‘The World Celebration Collection’.

It puts further doubt in the minds of many fans who have so far seen the suspension and potential cancellation of the Mary Poppins attraction and changes to Spaceship Earth thanks to changes spotted at the EPCOT Experience.

Back in July, we had heard that Disney had plans to taken a “different approach” when it comes to the Festival Center and it would appear that based on this new release, the new approach is a complete change to how the building looks.

Related: 3 reasons why Epcot is still worth your time during construction

Given how profitable the various different festivals at EPCOT are for the Walt Disney Company we’d expect to see a new Festival Center in some capacity but given the impact the pandemic has had on the financials, it will be interesting to see where the Imagineers take the plans next.

Either way, we are excited to see the construction work at EPCOT continue and despite the setbacks, we’re sure that Disney will end up giving new life to the park in the year ahead. The good news is that we know Remy’s Ratatouille Adventure and Guardians of the Galaxy: Cosmic Rewind are both still being worked on!

If you’re looking to plan your next trip to the Walt Disney World Resort soon then be sure to chat with our friends at Academy Travel. No matter what your Disney Parks needs. the team will be able to help you to book your next magical vacation. Contact their team now for a free quote!

What do you think about potential changes to the festival center at EPCOT? Let us know in the comments below.