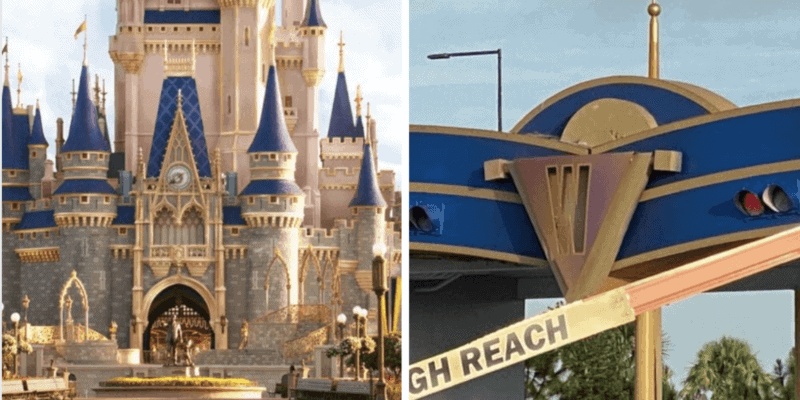 The Magic Kingdom toll plaza entry sign has been undergoing some changes recently. The Disney theme park sign is being transformed to match the new Cinderella Castle paint job. Instagram user @viajes.y.magia shared the following photo of the latest progress on the Magic Kingdom sign’s renovation:

In English, the caption reads:

Pink and blue! The transformation of the Magic Kingdom toll plaza continues in preparation for the 50th anniversary of Walt Disney World!

New rose gold accents have been added to the toll booth marquee!

Although Walt Disney World officials haven’t specifically said the Magic Kingdom toll plaza update is for the theme park’s 50th Anniversary in 2021, most fans are operating under the assumption that this is one of the first projects being done in preparation for next year’s celebration. The pink and gold accents along with the dark blue paint are not unlike the colors used on Cinderella Castle, which was recently transformed.

If you need a reminder of what the Magic Kingdom toll booth sign looked like previously, Instagrammer @tradzak shared this photo just three days ago (proof that the rose gold accents are, in fact, very new!)

Here, we can clearly see the royal blue and gold color scheme that will change the look of one of Disney World’s most famous park entry signs.

If you are unfamiliar with the details surrounding the recent Cinderella Castle refurbishment, and subsequent Magic Kingdom toll booth repainting, Disney Parks Blog posted these details in February of this years:

Cinderella first transformed into a princess 70 years ago this week when the animated classic was released—and ever since, her courage and kindness have been inspiring guests and cast members alike. We are excited to share that her story has inspired a bold, shimmering and royal makeover of her namesake castle at the heart of Walt Disney World Resort.

Related: Inside Look: Capturing the New Colors of Cinderella Castle

Do you like the new Magic Kingdom marquee colors? Are you planning to visit Walt Disney World Resort for it’s 50th Anniversary Celebration – The Most Magical Celebration on Earth?

Let the expert team at Academy Travel help you plan every detail of your next Disney theme park vacation!