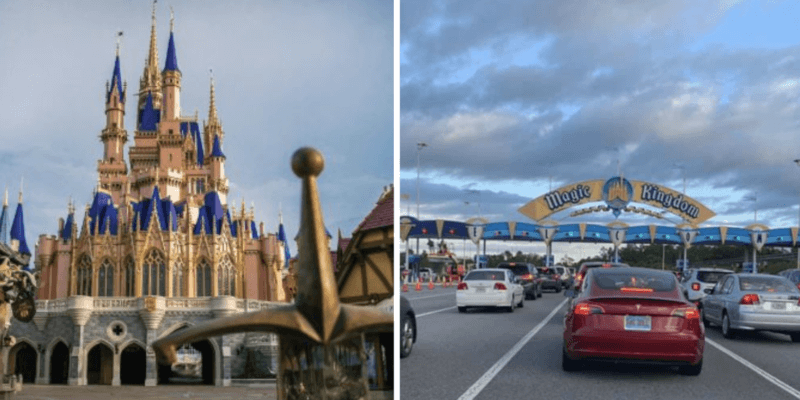 Now, we have photos of some of the changes that are taking place in the parking plaza. As you can see, painting has begun on the left side of the Magic Kingdom toll booth sign. The new royal blue color matches the blue on Cinderella Castle’s recently updated color scheme.

Disney has not yet announced exactly what changes are being made to the Magic Kingdom parking plaza ahead of next year’s 50th Anniversary Celebration. In the picture below, you can see that some toll lanes are currently closed to Guests during the repainting process. The toll booths also appear to be getting a royal blue makeover.

As a reminder, this picture below is from July 2020 and shows what the Magic Kingdom parking plaza sign looked like before renovations got underway this week.

It is also worth noting that today marks Magic Kingdom Park’s 49th Anniversary! It opened on October 1, 1971.

The upcoming Walt Disney World 50th Anniversary Celebration is officially called “The Most Magical Celebration on Earth.” Although the celebration will be smaller than Disney originally intended due to the unexpected coronavirus pandemic, there are still plenty of exciting things in-store for Disney World fans.

New merchandise collections are sure to be available all year long, Remy’s Ratatouille Adventure will open in the EPCOT World Showcase’s France Pavilion, and the TRON Light Cycle Run roller coaster in on-track for its scheduled opening in Magic Kingdom’s Tomorrowland area.

If you’re looking to schedule a trip to Magic Kingdom, EPCOT, Disney’s Animal Kingdom, or Disney’s Hollywood Studios anytime soon, let the experts at Academy Travel help you plan every detail of your vacation, including booking your Disney Park Pass reservations.

Comments Off on PHOTOS: Changes Are Happening at Magic Kingdom Parking Plaza