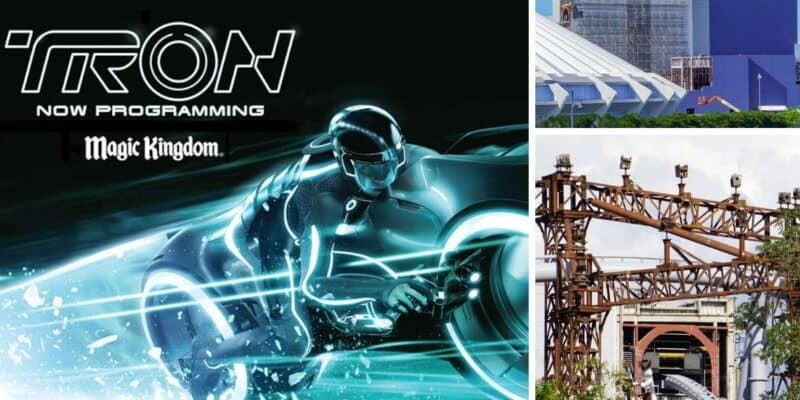 Walt Disney World Guests cannot wait until construction is complete on the highly anticipated TRON Lightcycle / Run roller coaster which is currently being built in Tomorrowland at Magic Kingdom.

We recently reported that Disney has finally raised the canopy on the upcoming attraction, but it looks as though construction is continuing to move very quickly as we have even more photos showing the latest track installment and canopy structure thanks to our friends over at @bioreconstruct.

The first shows the current exterior of TRON, which you can see if almost a purplish-blue coloring.

The second Tweet from @bioreconstruct shows us a glimpse of the new TRON canopy structure through the trees in Tomorrowland. The progress is absolutely incredible.

A glimpse of the Tron canopy structure through Tomorrowland trees. pic.twitter.com/gdviGOI9pE

And here is another shot of the same canopy structure, but this time in the background you can see where the TRON track will return into the building.

Some of the Tron canopy structure. In background, where track returns into the show building. pic.twitter.com/Va7YMBoSLG

Disney first announced a new TRON attraction would be coming to Magic Kingdom at Walt Disney World during the D23 Expo in 2017. The new ride is currently being built in a new area next Space Mountain.

You can watch Inside the Magic’s video on the announcement below.

TRON Lightcycle / Run is set to open at Magic Kingdom Park in time for Walt Disney World’s 50th anniversary in 2021.

Are you excited for the upcoming TRON Lightcycle / Run attraction? Let us know in the comments below.

If you want to visit Walt Disney World and need helping planning the vacation of your dreams, don’t hesitate to reach out to our friends, the Authorized Disney Vacation Planners at Academy Travel, for a free quote.