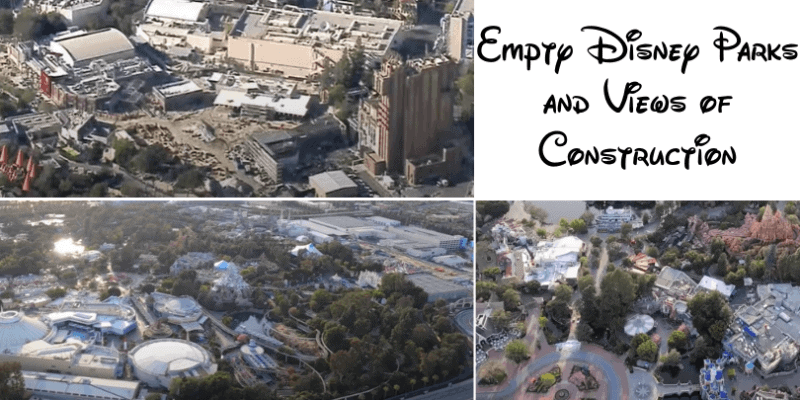 It also seems that because of this construction delay, the opening date for Avengers Campus (previously scheduled for July 18, 2020) has been pushed back. An exact opening date for Mickey and Minnie’s Runaway Railway (which will be located in Mickey’s ToonTown) has not yet been announced.

This week, however, aerial views of Disneyland Resort have been posted to social media, revealing some details of the new attractions and areas of the southern California theme parks.

The images below show a closer look at Avengers Campus, as well as Mickey and Minnie’s Runaway Railway.

A look at the new #spiderman #attraction show building, which was set to open this July at disneys #californiaadventure park in #avengerscampus but has now been postponed. (I think I can still see #abugslife theater behind it lol) #disneyland #waltdisneyimagineering

And last but not least, check out how much land #mickeyandminniesrunawayrailway #attraction will use up in #disneylandpark this will be the biggest and newest dark ride attraction to #mickeystoontown since #rogerrabbitscartoonspin opened! And is set to open sometime in 2022. #disneylandpark #happiestplaceonearth

The image below — courtesy of Micha Muzio — shows an empty Disneyland. But in the top right corner, you can see just where Mickey and Minnie’s Runaway Railway will be. If you take a closer look, it is the large construction site in the top right behind it’s a small world.

For a video perspective, check out these helicopter views of Disneyland Resort, which includes a look overhead of each of the lands. This video was recorded on March 27, 2020, and construction has not taken place since then.

This video includes views of Avengers Campus at California Adventure, and if you take a closer look, you can see where each of the new attractions will be, including the new Spider-Man ride as well as the E-ticket attraction, in which the ride vehicle is a quinjet.

Views of Disneyland Resort begin at 3:09.

Read our coverage of empty Disneyland Resort in our previous articles here and here!

Images of the construction of the TRON roller coaster have also surfaced online, and this is one attraction that we can’t wait to experience at Magic Kingdom park.

In the image below, you can see some of what the track for TRON Lightcycle Power/Run will look like. This image was taken before the building was constructed, but we wanted to share so fans can get a sneak peek:

You can read more information on what was previously announced to be coming to Disney World in time for the resort’s 50th anniversary — from TRON to Guardians of the Galaxy and more — in our article here.

Which new Disney Parks attraction are you mist excited to experience? Do you plan to travel to the Disney Parks once these new lands and attractions open? Let us know in the comments!