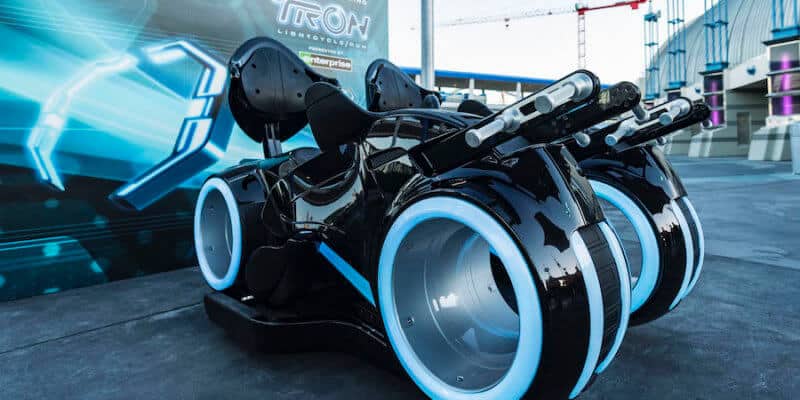 The programming is coming together in Magic Kingdom’s Tomorrowland! Our favorite Resort recently finished up a thrilling Rise of the Resistance opening celebration where a Tron Lightcycle Seat was offered up for photo ops and testing. These rider seats are similar to the ones that are in Shanghai Disneyland Park, as Florida’s own attraction is racing toward completion in 2021. 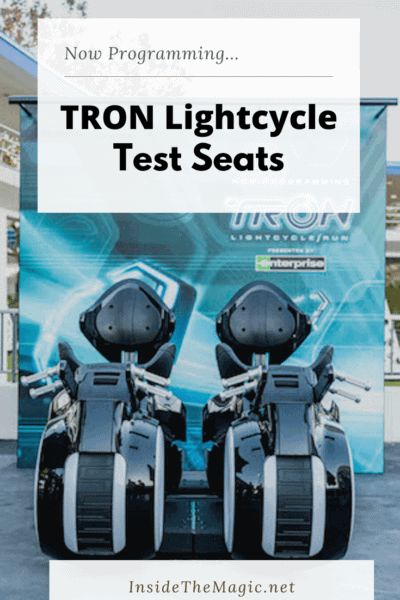 We first got a glimpse of the TRON Lightcycle seats at D23 in 2019, where a single display bike was lit up and on view. Now we have the chance to sit on a pair of bikes that are reminiscent of both Hagrid’s Coaster and the Flight of Passage Rider Seat.

The ride is scheduled to open in time for the 2021 celebration of Walt Disney World’s 50th birthday, along with other Resort-wide improvements like new resorts, attractions, and refurbishments. The coaster-style attraction invites guests to board a train of side by side Lightcycles for a race in a digital frontier. Located near Space Mountain, we’ve been reporting on the construction as it progresses.

Our reporters were able to sit down on the TRON Lightcycle/Run seats for testing during a media event and report back that they feel quite roomy, with the “back” of the bike being far away from the rider. While there is currently no test locking mechanism on display, we can’t say what the harness/secure lap belt may look like for the bikes. It is very familiar, much like the Flight of Passage Rider Seat, which was available at Media Previews for testing along with its locking system. Several guests were concerned about sizing issues or locking mechanisms, and this Flight of Passage Rider Seat post was instrumental and timely for figuring that out.

We’ll keep you posted when updates are made to the test seats. For now, hop on and snap a few photos as you get ready to race!

There may even be a rumor of a TRON movie reboot to go along with the attraction. Read more about that here. Do you think it would go straight to the new Disney+ platform as a streaming feature film, or be ready for a theatrical release? All bets are off as of now, so we’ll see if anything comes of the murmurs.

Contact Academy Travel to get a free no-obligation quote at 609-978-0740. Academy Travel is an Authorized Disney Vacation Planner and has been designated as a Diamond EarMarked Travel Agency specializing in Walt Disney World, Disneyland Resort, Disney Cruise Line, Adventures by Disney Vacations and Aulani, a Disney Resort & Spa.

Will you be racing along when Tron opens? Book your vacation now for 2021 to experience the digital racing coaster.