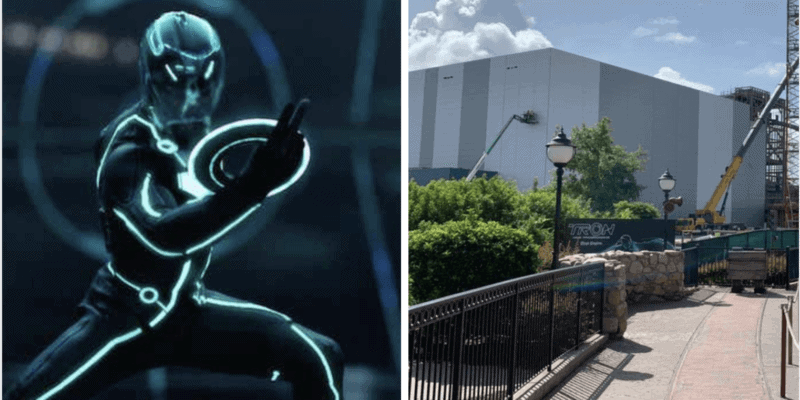 During today’s AP Preview of Magic Kingdom park, our reporters have experienced everything from seeing the renovation of Cinderella Castle to new health and safety measures to social distancing on transportation to changes to attraction experiences.

They’re also getting the chance to see construction progress first-hand. We have new photos of the progress on the highly anticipated Tron Lightcycle Power Run roller coaster that is being built in Tomorrowland.

According to the Wikipedia entry about the Tron coaster, which is based on the Tron attraction at Shanghai Disneyland, the new Magic Kingdom thrill ride is described as:

Tron Lightcycle Power Run is a semi-enclosed launched steel motorbike roller coaster attraction at Shanghai Disneyland Park, and an upcoming attraction at the Magic Kingdom in Walt Disney World. Based on the Tron series, the attraction takes guests on a ride through the Grid on their own light cycle.

Last year, Disney shared an official rendering of how the completed Tron Lightcycle Power Run coaster will look situated next to Space Mountain.

Could Tron 3 be on the way?

There have long been rumors of a Tron 3 movie that follows the storyline of Tron Legacy (2010). Recently, Disney executive Mitchel Leib spoke out about the possibility of Tron 3 coming to fruition.

“…we’re looking at making a sequel to Tron now, we’re looking at Tron 3. And we’ve got a great script, I mean a really phenomenal script that we’re very excited about. Whereas the timing wasn’t right to have done it years ago, I think we feel like the timing is right now, and I feel like we’ve learned a lot of lessons from that last movie.”

It would be the perfect tie-in to announce Tron 3 on the day the Tron coaster debuts in Magic Kingdom!