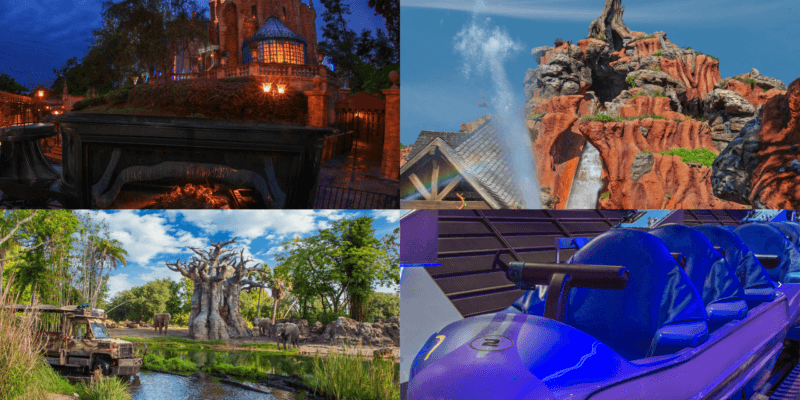 Following on from our reporting of attraction changes during the Cast Member preview days, the team here at ITM are finally back in Walt Disney World today during the AP previews and boy are the parks looking great!

Plenty of health and safety protocols have been put into place including social distancing measures, excessive cleanliness, encouragement of mobile orders, plexiglass, and the elimination of character meet and greets, parades and fireworks.

Given the situation, we also expected to see some big changes to popular attractions across the Walt Disney World resort but some of these changes are pretty drastic so we wanted to share what to expect from queues and attractions when you next visit the parks.

Keep in mind that when it comes to cleaning the attractions, Cast Members confirmed with our Inside the Magic team today that ride vehicles are cleaned every two hours.

The queue for Peter Pan’s Flight has seen some significant changes with markers on the floor and a hand sanitizer station as guests enter the queue and the attraction:

“it’s a small world” has a similar treatment, Fantasyland is being handled very well by the looks of it:

It looks a lot busier in Frontierland at the moment with guests queuing right the way outside the entrance of the attraction:

The same can be said for The Jungle Cruise, it’s certainly a lot busier around Adventureland and Frontierland currently:

Quite a lot of work has been done within the queue to control crowds with social distancing:

Being an indoor seated attraction, there has been a lot of changes happen here including the addition of markets to tell people where they aren’t allowed to sit:

Plexiglass has been installed throughout the queue, changing the attraction pretty drastically:

In addition to all the floor marking and line separations that have been installed, Disney is doing regular cleaning of its rides throughout the day. For example, one of our Inside the Magic reporters was just told it takes 10 minutes to go through Haunted Mansion and sanitize all the doom buggies on the track. So, if you are heading to Walt Disney World in the coming months, please remember that lines will periodically stall for a short period of time while Cast Members perform these regular cleanings throughout the day. Hopefully, this won’t present too much of an issue with the limited capacity that Disney has implemented to help maintain crowd levels.

A reminder that today/tomorrow are Annual Passholder preview days and then on Saturday, July 11th both the Magic Kingdom and Disney’s Animal Kingdom open their doors to the public again for the first time since March.

Following on from Saturday, on July 15th EPCOT and Disney’s Hollywood Studios will be opening to the public.

Related: Read our guide to the reopening of the parks

If you’re planning a trip to Walt Disney World then let our friends over at Academy Travel help you plan your next vacation. Whether you just want to visit a couple of the theme parks, book a Disney Resort hotel or need help understanding dining reservations, the team can help. Contact their team now for a free quote!