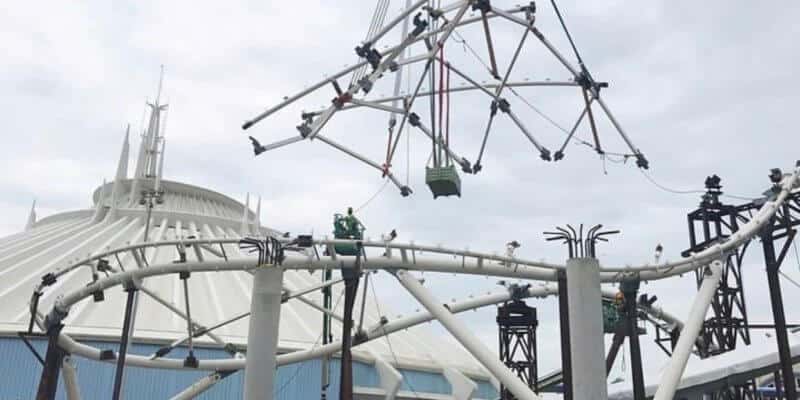 Disney is finally raising the canopy on one of its latest upcoming attractions. The TRON Lightcycle Power Run Roller Coaster has been in development for some time, being one of the most highly anticipated attractions that will be coming to the Walt Disney World Resort, and it has reached another significant construction update.

The TRON Lightcycle Power Run coaster will be quite massive and be covered by a colorful, light changing canopy. As of today, we’ve learned that the first canopy piece was installed! Thanks to the Walt Disney World Instagram Page, we learned that Disney Imagineers have begun constructing a 40-piece canopy that will surround the attraction. This canopy is known as the Upload Conduit, and it is one of the most exciting updates we have seen since the lightcycle bikes were put on display for photo opportunities before testing. Disney’s latest update continues to build the anticipation for this attraction, riding on the momentum built from track updates and scores of pictures! And we at Inside the Magic can’t wait for this coaster!

The coaster is said to be completed by Walt Disney World’s 50th anniversary, which will be October 1, 2021.

Take a look at the Shanghai version below and see what to expect for Walt Disney World:

Are you and your family planning a trip to Shanghai Disneyland or the Walt Disney World Resort? Let us help with your vacation planning!

Are you excited for the TRON Lightcycle Power Run coaster to make its way to Walt Disney World? Have you experienced the attraction in Shanghai? Let us know in the comments!