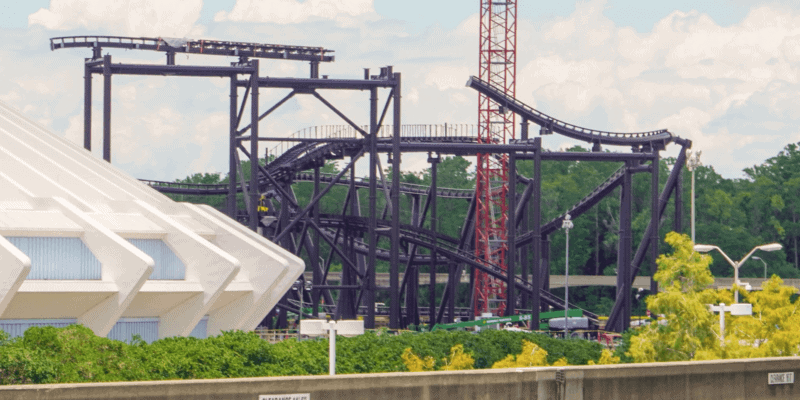 What’s felt like lightyears away is finally reaching new heights as the upcoming Tron attraction’s ride track appears to be approaching completion at Walt Disney World.

First announced back at D23 Expo 2017 over two years ago, it seems the Tron coaster at Walt Disney World finally appears to be materializing and we couldn’t be more excited! From these new images shared by @Bioreconstruct, the high-flying roller coaster looks to have most of its ride track up in the air.

The track is not fully complete as there are still disconnected parts of if that have yet to be connected. However, Disney is definitely making strides with the attraction and from this progress, we’re certain Magic Kingdom will be on the mark with a 2021 opening of the ride.

Close look at some areas of Tron track. pic.twitter.com/RCQqoYyuU9

When it opens, the attraction will allow guests to board a train of two-wheeled Lightcycles that will shoot them into the energy, lights and excitement of TRON’s high-tech universe.

Similar to the attraction at Shanghai Disneyland, the ride’s motorbike-styled vehicles will be Tron-themed and will allow guests to lean forward and grip a set of handlebars, which they will hold onto during the experience. A pad situated behind the seat secures the rider in place.

If the attraction follows in suit with Shanghai Disneyland’s exactly, it will shoot guests inside and out of the ride’s building at speeds of up to 60 miles per hour.

When it opens in 2021, the Tron coaster will be found in an all-new section of Tomorrowland, located north of Space Mountain. The ride will open side-by-side with two other attractions across the Walt Disney World parks, including a Guardians of the Galaxy roller coaster and Ratatouille experience at Epcot.

What are your thoughts on the construction status of the new Tron coaster coming to Magic Kingdom? Let us know in the comments below!

All the images featured in this article were from Twitter user @Bioreconstruct.