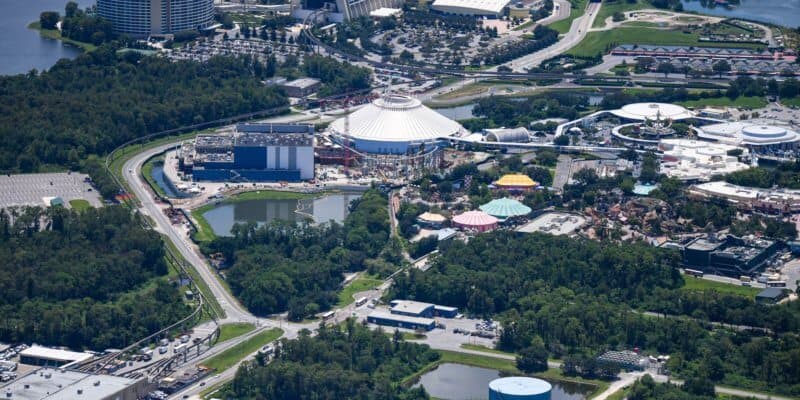 Of all the upcoming attractions being built right now at the Walt Disney World Resort, one that is most anticipated is the TRON Lightcycle Power Run Roller Coaster.

A sibling of the original from Shanghai Disneyland’s Tomorrowland, Disney World’s TRON coaster is currently being built in Magic Kingdom Park’s own Tomorrowland next to Space Mountain. It is expected to be finished in time for Walt Disney World’s 50th Anniversary Celebration, and Disney says that it is on schedule, but how far along is the construction?

Last weekend, pilot Jonathan Salazar (@TheDisneyPilot) took to the skies of Central Florida, to get some pictures of Walt Disney World. And that includes the Tron construction project. From the legal operational distance and a with a very impressive lens, Salazar captured the following pictures of Disney World’s latest roller coaster.

Related: Will the ‘Star Wars’ Hotel Be Open For Disney World’s 50th Anniversary?

One can see that the outside section of the track looks almost complete, and the main building complex housing the attraction looks to be far along in the construction process, as well.

We can also see how construction closes to the Tomorrowland Speedway has encroached upon the Walt Disney World Railroad, suggesting even more that it is the primary reason why the rail line is closed.

Once completed, there is going to be a sleek, futuristic, elevated walkway up from the center of Tomorrowland, with that main square structure capped with a curved outer shell.

Bob Chapek proudly announced that this attraction was coming to Walt Disney World and would be ready for the Golden Anniversary at the D23 Expo in 2017. You can watch that announcement below:

Disney Park Blog describes the attraction as such:

If you can’t wait to ride it in person, ride it virtually with this video from Disney Parks: