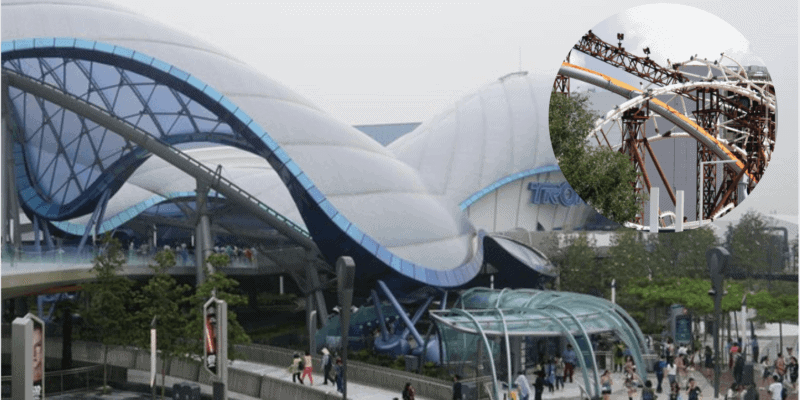 At the 2017 D23 Expo, the Walt Disney Company announced that the TRON Lightcycle Power Run roller coaster would be coming to Walt Disney World Resort’s Magic Kingdom theme park in time for its 50th Anniversary Celebration — the Most Magical Celebration on Earth — in 2021.

The project was, of course, halted during Disney World’s temporary coronavirus closure earlier this year, but construction has now resumed. Yesterday, Twitter user @bioreconstruct shared several photos of progress on the new thrill ride. The construction team is currently working on raising the canopy that will be one of the ride’s hallmark features.

The caption on this image reads:

Must of the of outdoor Tron roller coaster track is covered to prevent damage while the canopy is raised.

Must of the of outdoor Tron roller coaster track is covered to prevent damage while the canopy is raised. pic.twitter.com/pJnqqgLs2D

Another photo showcases some of the free form wave canopy. @biorecontruct provided these details:

Current state of the white free form structure of the Tron canopy. The rust-brown structure is temporary. Orange plastic covers some of the Tron roller coaster track.

Current state of the white free form structure of the Tron canopy. The rust-brown structure is temporary. Orange plastic covers some of the Tron roller coaster track. pic.twitter.com/X4roGbdyY7

Finally, @bioreconstruct shared a photo of the TRON show building from the Disney World Monorail:

The new TRON Lightcycle Power Run coaster is based off of the ride at Shanghai Disneyland, which is described as:

Although rumors have recently been swirling online about a TRON coaster delay, Disney has not confirmed that the project will not be finished ahead of Disney World’s 50th Anniversary Celebration.

Until Disney provides confirmation one way or the other, fans can work under the assumption that they will be able to enjoy the new Tomorrowland attraction throughout 2021. Stay tuned to the ITM newsletter — sign up below! — for the latest Disney Parks news.

If you’re looking to plan a trip to any of Walt Disney World’s four theme parks — Magic Kingdom, EPCOT, Disney’s Hollywood Studios, or Disney’s Animal Kingdom — contact the expert team at Academy Travel for help with every detail of your magical vacation at no extra cost!

Comments Off on Photos: Major Progress on TRON Coaster at Magic Kingdom!