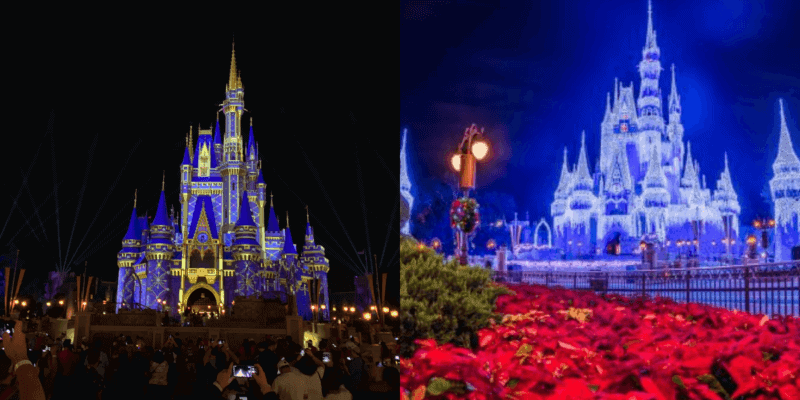 Guests visiting Magic Kingdom at Walt Disney World this holiday season will notice something missing from the ensemble: no lights on Cinderella Castle.

Year after year, Disney World would string scores of lights all across its flagship landmark so at night it would appear to be covered in ice. Annually, Elsa lights up the castle every evening, and Guests can enjoy a short show, A Frozen Holiday Wish. But that is not the case this year.

While in the park yesterday we got the chance to talk with Tara, one of the entertainment leads who said explained that they wanted to change it up and use the Cinderella Castle to show more than just pretty lights.

And that variety is present. Four different holiday overlays are projected onto the castle starting after dark and running through park closure. Due to the fact that it could not be a show like A Frozen Holiday Wish (in which Elsa lights up the castle alongside Anna and Olaf), each image is projected on the castle for about 15 minutes at a time. The lights on the trees and fountains across the hub also change to complement the ensemble.

Tara explained that “one of them might be similar to a Christmas sweater; one of them is traditional red, green, and gold; one looks like a jeweled Christmas ornament with dark sapphire blue and gold filigree; another one is what I like to call ‘peppermint sticks and polka dots.'”

She also confirmed again that these four projections will be shown on a loop throughout the night allowing for multiple chances to see every look. During the night, this writer noticed several people just sitting around the hub watching for each to appear with awe-inspiring transitions.

For those of you who miss the holiday lights and watching Queen Elsa transform Cinderella Castle into a dazzling ice palace, you can watch last year’s show below:

If you want to come see the new castle projections for yourself, our friends at Academy Travel are standing by to help you make this trip to Walt Disney World as magical as possible.

Which do you prefer? The ice or the projections? Let us know in the comments!