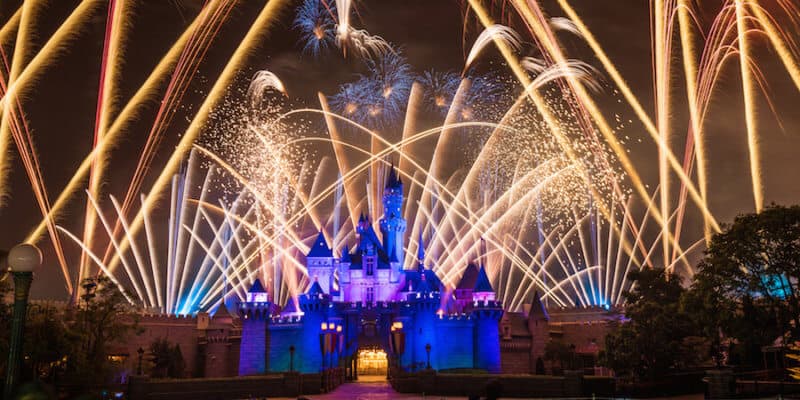 As several of the Disney Parks across the globe reopened to the public after being temporarily shut down due to the pandemic, they implemented new safety and health protocols in order to keep Guests and Cast Members safe while visiting the parks. One of those new changes Disney had to make was the elimination of fireworks.

Though this left many disappointed, it was the right thing to do, as fireworks tend to draw crowds into confined spaces for a lengthy period of time, making it difficult to keep a safe, socially distance from one another.

However, back in July, Shanghai Disney made the decision to resume its nighttime fireworks spectacular, Ignite the Dream – A Nighttime Spectacular of Magic and Light! Now, it looks as though another Disney Park may be bringing back nighttime entertainment to its Guests.

Inside the Magic came across two different Reddit threads — The first stating that Hong Kong Disneyland will be running its nighttime spectacular show once the reimagined castle — the Castle of Magical Dreams — makes its opening on November 21st for the theme park’s 15th anniversary.

The post reads, “Hong Kong reportedly running its evening show every day after castle opening. [The] show is set to be called ‘a dream of stars’.”

Hong Kong reportedly running its evening show every day after castle opening. Show is set to be called “a dream of stars” from disneyparks

We then came across yet another Reddit thread, which stated basically the same thing: “Hong Kong Disneyland castle stage and night lights open in preparation for the 21st.”

After doing a bit more digging, we found a Tweet from the Disney blog HKDL Fantasy, which included a photo of lights in the sky along with projections on the castle, which you can see below. This could be a sign that the park is testing the nighttime spectacular prior to the reimagined castle officially opening up in a few days.

One user even replied to the original tweet saying “Hold up… what is that projected on the castle?”

Related: Could Disney World Bring Back Fireworks This Year?

At this time, we are unsure if these lights are testing for bringing back nighttime entertainment to Hong Kong Disneyland or if this has something to do with the 15th anniversary of the Disney Park, which occurs in just a few days on November 21st. Hong Kong Disneyland did previously announce that the Castle of Magical Dreams would be opening to Guests on this day along with A Disney Christmas special event.

Starting November 21, 2020, Hong Kong Disneyland Resort will enter a magical milestone, as it officially celebrates its 15th anniversary with the opening of the reimagined castle – the Castle of Magical Dreams. On the same day, the resort’s “A Disney Christmas special event will kick-start to bring double the happiness to guests.

Just yesterday, Magic Kingdom at Walt Disney World Resort was seen testing fireworks after park hours, which you can see and read more about here. At this time, Walt Disney World has not announced what the testing was for, or when they would bring back nighttime entertainment. Inside the Magic will continue to update you as we get information.

Do you have plans to visit Hong Kong Disneyland for its 15th anniversary? Let us know in the comments below.

Need help planning your next Disney vacation? Get started today!

Comments Off on Is Another Disney Park Bringing Back Nighttime Entertainment?