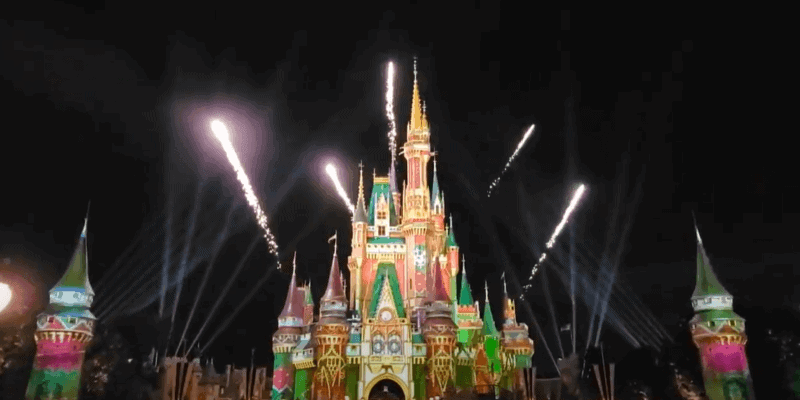 Fireworks return to Magic Kingdom and we could not be happier!

For the first time since Magic Kingdom reopened to Guests back in mid-July, we finally got to see fireworks return to Cinderella Castle.

You can see a video that was shared by Magic kingdom Guest @procrurandomorlando on Instagram!

While these are not full-fledged fireworks, the pyrotechnics were a truly welcomed sight! Low-level fireworks are being set off every 15 minutes, or so, when the castle projections change.

YouTuber Cory Meets World also shared the fireworks (we took the screenshot below almost two hours into his live stream):

You can watch the fireworks in his live stream — don’t blink or you’ll miss them!

Note that this was a complete surprise to Guests this evening, but we’ve found out this won’t be the last time this occurs! Disney has not shared when fireworks shows like Happily Ever After will return to Magic Kingdom or any of the other Disney Parks at Walt Disney World Resort, but for now, we’re excited about this magical addition to the park.

Recently we reported that Magic Kingdom tested fireworks extensively from 10-12 at night when the park was closed to Guests. You can read more about that here. This is all an encouraging sign that we may see more and more fireworks at the parks.

With that being said, reportedly Disney is doing some promotional photography tonight and that is why some are saying the fireworks are being set off. However, after we initially published this article, it has been confirmed that the fireworks will occur nightly! Reporter Scott Gustin shared that the “pyrotechnic pixie-dust moments” are “occasional bursts of merriment” that will occur nightly through December 30 as part of the holiday projections on Cinderella Castle.

Fireworks aka "Pyrotechnic pixie-dust moments" have returned to Magic Kingdom. ??

The “occasional bursts of merriment” will happen each night as part of the Cinderella Castle projection effects through Dec. 30. pic.twitter.com/vIIGWSQPtC

What do you think about the fireworks tonight? Do you think they are here to stay? Let us know in the comments!