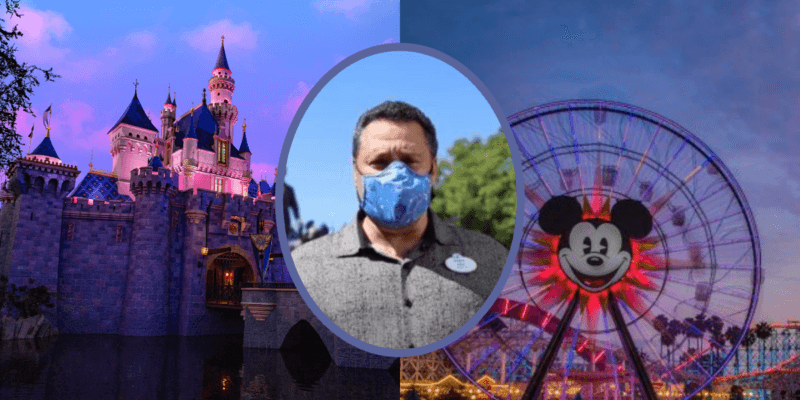 With 2020 almost behind us — and hope for 2021 looming large — many are spending today simultaneously processing all that has happened during this unprecedented year and looking ahead to a, hopefully, brighter future.

One of the people who has faced an excessive number of challenges throughout the coronavirus pandemic is Disneyland President Ken Potrock, who took-up the mantle of Disneyland Resort President in May following Rebecca Campbell’s exit and while the theme parks were still closed.

Disneyland Park and Disney California Adventure Park closed on March 14, meaning that Potrock has never been in-charge of an open Disneyland Resort. Now, he has spoken to OC Register about the challenges he’s faced after being named one of the newspaper’s 100 most influential people of 2020.

As per OC Register’s report:

“What a way to enter a new job,” Potrock said during a virtual interview. “It really portended to be spectacular. And, lo and behold, it’s been less than spectacular in that we’ve had to face these challenges.”

The challenges Potrock is referring to are, of course, complex. In addition to dealing with The Walt Disney Company’s mass layoffs — which have resulted in tens of thousands of Disneyland Resort Cast Members being left unemployed — he and other Disney Parks executives have found themselves contending with the State of California’s theme park reopening guidelines that have, at best, been complicated and, at worst, detrimental to the entire Southern California economy.

California Governor Gavin Newsom has imposed theme park reopening guidelines that have been called, among other things, “unfair” and “unworkable.” Now, with a recently extended regional stay-at-home order impacting Anaheim, there is no imminent reopening date in sight for Disneyland and Disney California Adventure.

The Downtown Disney District and Disney California Adventure’s partially reopened Buena Vista Street have, however, been able to operate while following all necessary health and safety regulations.

“Walk down Harbor Boulevard and there isn’t a soul to be found,” said Potrock, 61, of Studio City. “It’s heartbreaking. I get notes and letters every single day, if not every single hour, from our cast members and from business partners that are just worried, afraid and stressed.”

By the end of the year, the Disneyland resort will have lost an estimated $3 billion in revenue during the pandemic closure, according to financial analyst MoffettNathanson.

Related: This Part of Disneyland Will Soon Look VERY Different

“The reaction from our cast members has been nothing short of magnanimous. With all the hardship that they are facing, the generosity, courage and grace under pressure that they’re showing is something that I marvel at every single day.”

As Disneyland Resort Cast Members, Guests, and executives alike await news about when they will be allowed to reopen the gates — the widespread availability of the COVID-19 vaccine may ultimately be the answer — Potrock notes that he, a blue-collar boy from Akron, Ohio, is excited about the possibilities that exist for Disneyland Resort in 2021 and beyond:

“Boy, what a cool opportunity this affords,” Potrock said. “Even in the pain and suffering, I have to look at, ‘Is there a glimmer of hope in the future?’ And that glimmer is the exciting part.”

Disneyland also started a health and safety campaign to encourage the public to stay home and slow the spread of COVID-19. You can read more here.

Are you looking forward to visiting Disneyland again? What’s the first thing you want to do?