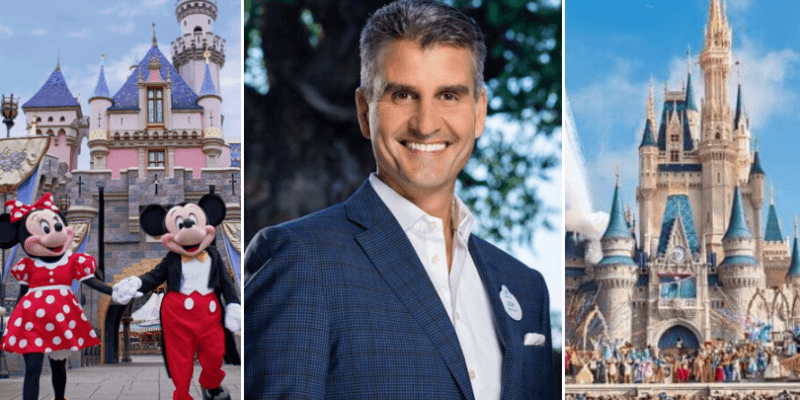 Disney just announced the new leadership team for Disney Parks, Experiences, and Products. The news was announced in a press release on Monday.

Former Chairman of Disney Parks, Experiences, and Products Bob Chapek — who was named Disney CEO earlier this year — shared his congratulations to his new successor, Josh D’Amaro, who was named president of Walt Disney World Resort less than a year before he was given this new role.

“I’m incredibly proud of the new leadership team at Parks, beginning with the segment’s Chairman, longtime Disney veteran Josh D’Amaro, and his newly announced team of Jeff Vahle, Ken Potrock, Kareem Daniel and Thomas Mazloum,” Chapek said. “These talented executives played pivotal roles while leading our exceptional cast members during the largest period of growth in the segment’s history, which included the expansion of our parks and resorts around the world, the addition of new attractions including two highly acclaimed Star Wars-themed lands, and a shift to more personalized experiences for guests. And I am confident that as they assume even greater responsibility and pursue new opportunities, these proven leaders will have an even bigger impact on the future of our company.”

Disney stated in the press release announcing the new Disney Parks, Experiences, and Products team everything that D’Amaro will be taking over from Chapek.

D’Amaro also shared a statement of gratitude in the announcement of his new role. He thanked Chapek for passing the opportunity down to him, and shared how honored he is to lead his new team.

“I want to thank Bob for giving me this opportunity, and I look forward to following his record of driving innovation, value and growth at Parks,” D’Amaro said. “I am honored to be able to lead this newly announced team of exceptional senior leaders as we assume our new roles and continue to deliver unforgettable experiences for our guests. Even during this challenging time, the enthusiasm of our dedicated cast members for what we do is unwavering, and my goal is to bring them back to work as soon as possible so they can continue to create that magic.”

D’Amaro is known for his care for Disney Cast Members and Guests, so it’s no surprise to many who have closely followed his journey with The Walt Disney Company that he is now the newest chairman of Disney Parks. Before he was named President of Walt Disney World Resort in September 2019, D’Amaro served as President of Disneyland Resort. He has been with Disney since 1998 and has held numerous leaderships at the company.

Disney also announced that in addition to the new roles that were announced today, there are many members on the team who will continue to be a part of Disney Parks, Experiences, and Products.