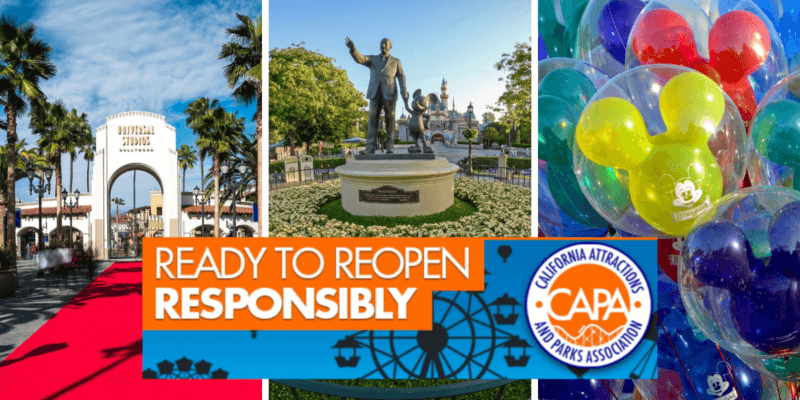 The California Attractions and Parks Association — which represents Disneyland Resort, Universal Studios Hollywood, and other theme parks and amusement parks across the state — has issued an official statement in response to the reopening guidelines for California theme parks.

In the statement, CAPA says that the guidelines issued by California Governor Gavin Newsom’s administration are “unfair and unreasonable.” These sentiments were shared by Anaheim Mayor Harry Sidhu — who said that the guidelines “fail working families and small businesses” — as well as Disneyland Resort President Ken Potrock, who called the guidelines “unworkable” and “arbitrary.”

But it has been predicted that because of this, Disney and Universal theme parks in CA likely cannot reopen until 2021, and even when they reopen the guidelines will be quite strict. 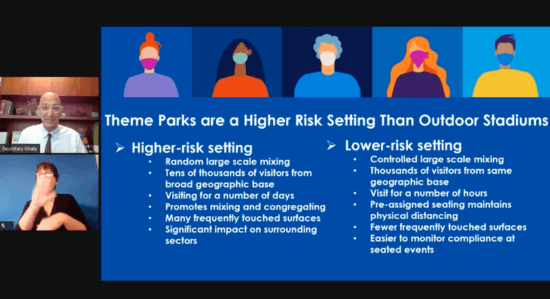 Both Dr. Ghaly and Gov. Newsom have reiterated that their approach to reopening theme parks is “health-first” and “data-driven,” though the theme parks don’t necessarily believe that is the case.

Below is the full statement issued by Erin Guerrero, Executive Director of the California Attractions and Parks Association:

“To say today’s announcement on theme parks is disappointing would be a grave understatement. The Governor has not used science or data to inform his decision. Theme parks have opened and operated safely around the world for months. Data and science prove that theme parks can operate responsibly anywhere – there is no rational reason to believe they can’t do so in California. No one cares more about park employee and guest safety than the parks themselves.

“Let me be unequivocal– the guidance issued by the Newsom Administration will keep theme parks shuttered for the foreseeable future. By forcing amusement parks to stay closed until their home county reaches Tier 4, the Governor has issued a “Keep Theme Parks Closed Indefinitely” Plan which will devastate California’s major theme park industry.

“This plan prolongs unemployment for tens of thousands of people, hastens bankruptcy for families and small business owners adjacent to parks, and contributes to insolvency for local governments whose budgets rely on parks as an anchor economic driver.

“While we appreciate the more nuanced approach in the guidance for smaller theme parks, keeping California’s larger parks closed is unfair and unreasonable. Based on the responsible reopening of parks in other countries and states, science and data do not support the indefinite closure of this iconic industry in California.

“Responsibly reopening amusement parks on a reasonable timeline can and should be done while we fight this pandemic – the two are not mutually exclusive. California’s theme parks and their phenomenal workforce are ready to reopen responsibly. Parks’ loyal guests are ready and the communities and local governments surrounding the parks are ready. We urge Governor Newsom to revise this guidance to allow for a reasonable and responsible reopening of California’s signature theme park industry in Tier 3.”

In yesterday’s update, Newsom asked for forgiveness in his stubbornness about reopening theme parks, sharing, “I hope one recognizes our stubbornness on a health-first, data-driven decision-making process is done with our eyes wide open on what’s happening now around the world, not just what’s happening across the United States. Not yet here in the state of California, but that’s only because we are being vigilant and have to maintain that vigilant so we avoid any further increase in transmission.”

Stay tuned to Inside the Magic for more information on California theme park operations, including information from Disney Park officials and Universal Studios Hollywood.