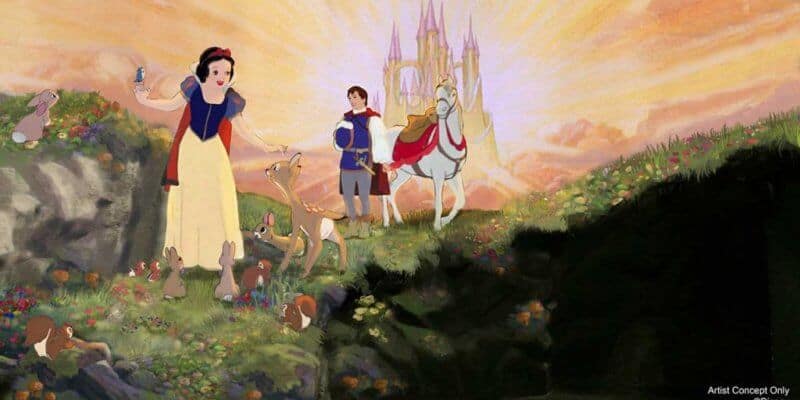 We expect some major changes to Disneyland and Disney California Adventure when the Disneyland Resort theme parks reopen sometime in 2021. One of the changes that we know is for certain is the refurbishment of Snow White‘s Scary Adventures, announced in late 2019. Here, we take a deep dive into this original attraction at the Happiest Place on Earth and share what we can expect from the ride’s reimagining.

Since this article was originally published, we have received more information about the refurbishment of Snow White’s Scary Adventures, including the announcement of the attraction’s new name: Snow White’s Enchanted Wish! Keep reading for the most up-to-date information.

Snow White’s Scary Adventures is an attraction as old as Disneyland itself. The popular Disney Princess ride first opened as Snow White’s Adventures in 1955 and is one of the first dark rides to debut in Walt Disney’s original Magic Kingdom. Being one of the anchors of Fantasyland, Snow White’s Scary Adventures is a must-do for anyone who wants to “walk in Walt’s shoes” during their Disneyland day. And although its counterpart at Walt Disney World is long closed (Magic Kingdom in Florida now hosts the Seven Dwarfs Mine Train), the original version in California still stands.

For reference, here is the official description of the attraction as it is currently written on the official Disneyland Resort website, as of December 17, 2020:

Follow the Fairest of Them All
Settle into a wooden mine cart and accompany Snow White as she flees from the evil Queen.

“Whistle While You Work” at the cozy cottage of the Seven Dwarfs. Visit dazzling mines filled with glowing gems. Then, proceed with caution into the dark and haunted forest—and the Queen’s sorcery chamber and spooky dungeons.

How Scary Is It?
True to its name, Snow White’s Scary Adventures focuses on the perils of Snow White’s fairytale journey. The ride includes some dark, spooky scenes that may be frightening for young children—including dungeons, skeletons, haunted trees, unexpected transformations and a menacing evil Queen.

Beware the Queen’s Window!
Peer up at the window above the outside entrance to Snow White’s Scary Adventures and, if you’re patient, you might see the evil Queen pull aside the velvet drapery to spy on those below.

Note that we do expect the description to change when the attraction finally reopens at the theme park. However, for now, it is interesting to note.

So, what do we expect from the reimagined attraction? As frequent Disneyland visitors (and anyone who feels scarred by the ride’s frightening nature) will recall, the ride takes Guest on a journey through the story of Snow White. And, after we get through multiple scary encounters with the Evil Queen, the story feels as though it abruptly ends with Snow White and the Prince riding off to find their happily ever after.

However, Disney has decided recently that they want to give Snow White a better fairy tale ending than the attraction previously offered her. Walt Disney Imagineering is adding some magical enhancements to show Guests a more magical ending to the story. According to the 2019 announcement on Disney Parks Blog, the attraction will be updated with “new magic inside and out.” There will be all-new scenes, such as Snow White waking up after receiving true love’s kiss from the Prince, and her being reunited with her animal friends in the end.

Disney also said that Guests will notice new audio and visual technology being added to enhance the experience. Additionally, the attraction will reopen with a refreshed exterior.

More Details: Disneyland Resort Made Some Major Updates During the Closure

Here’s what Disney has shared:

This classic Fantasyland attraction, Disneyland park’s only ride-through princess attraction, will be updated with new magic inside and out in 2020. Walt Disney Imagineering is reimagining how the classic tale of Snow White lives happily ever after, and guests will be invited to follow along with her story.

This isn’t the first time the attraction has undergone a significant refurbishment. In 1983, as a whole new version of Fantasyland was unveiled, Snow White’s Adventures reopened with new technology and a brand-new facade, along with the new name. In 2020, this opening day attraction will celebrate 65 years at Disneyland!

Since we originally published this article, we received an update from Disney! Disney Parks Blog announced that the attraction will be renamed. It is no longer Snow White’s Scary Adventures — now, it will be Snow White’s Enchanted Wish.

While Disneyland park has been closed, Walt Disney Imagineering has been putting the finishing touches on this cherished attraction, which will be ready to welcome guests when we reopen our theme parks at a later date. While you may recognize some familiar elements in the attraction, you’ll be surprised to discover enhanced story details and all-new scenes. Take a look at the sneak peek below!

There are more surprises to discover and we cannot wait for you to experience the magic of this timeless fairytale, and Snow White’s enchanted wish coming true at last!

The extended refurbishment of Snow White’s Scary Adventures (now Snow White’s Enchanted Wish) has taken place — though having to be paused for a while due to the temporary theme park closures and ongoing pandemic — throughout 2020. We know that work has continued on this attraction throughout this year, and aerial views of Disneyland Park as well as permits filed with the City of Anaheim have indicated that Disney is getting ready to unveil the reimagined ride to Guests.

Or at least, they’re seemingly prepared to reopen the attraction as soon as the Southern California Disney Parks reopen. In any case, many have asserted that the extensive refurbishment for the Snow White ride (as well as the refurbishments of other attractions, like Haunted Mansion) has neared completion.

While the ongoing park closures have led to some unfortunate circumstances for The Walt Disney Company and its employees, they have also been a time of improvement within the theme parks. Work has continued to progress on Snow White’s Scary Adventures — or, as we will know it, Snow White’s Enchanted Wish — and Disney has confirmed that “Walt Disney Imagineering has been putting the finishing touches on this cherished attraction, which will be ready to welcome guests when we reopen our theme parks at a later date.” We at Inside the Magic are excited to get to experience the new and improved version of the classic Disneyland ride as soon as the theme parks reopen…whenever that may be.

So, a reopening date for Snow White’s Scary Adventures won’t be announced until a reopening date for Disneyland is revealed. But just know that, as huge fans of original Disneyland attractions, we can’t wait to share the news. It feels as though we’re getting a refreshed fairy tale ride as soon as the California Disney Parks reopen — and we sure are excited.

Are you eager to experience the new version of Snow White’s Scary Adventures as soon as the attraction reopens? Let us know in the comments!

Book your next Disney trip with our friends at Academy travel!