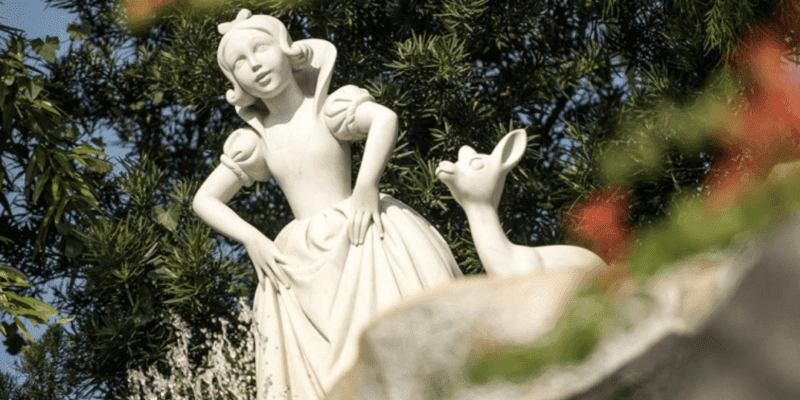 Slice up a fresh gooseberry pie! We’ve got some magical insights into one of the most serene and beautiful areas of Disneyland Park in Anaheim, California. The picturesque area to the right of Sleeping Beauty Castle is a “lovely little water wonderland adorned with handcrafted figures of Snow White, Doc, Dopey, Bashful, Sleepy, Happy, Grumpy and Dopey.” Snow White Grotto celebrates its 59th anniversary this year, so read below for seven little facts about the enchanting area!

D23 gave us some enchanted tidbits about Snow White Grotto in a 2016 news story.  In April of 1961, the area was originally designed with marble statues and a beautiful waterfall area. Later, in 1983, Fantasyland was reimagined as a whole, and Snow White Grotto got its fair share of refurbishment. Producer/editor and Disney historian Les Perkins, who worked on the reimagining of Fantasyland in 1983, offers factoids about the area…

Here, we hear Les Perkins, who worked on the reimagining of Fantasyland in 1983, share a sweet story about acquiring the audio for the well and Snow White’s show loop (heard in the video below) with D23:

“When Les supervised the revised 1983 audio for Fantasyland with the assistance of Disney artist/historian Stacia Martin, he contacted none other than the original voice actor, Disney Legend Adrianna Caselotti, to recreate her trilling coloratura for the grotto. “When I called her, I mentioned that it was my birthday,” Les remembers with a smile. “She launched into a chorus of ‘Happy Birthday’ in that unmistakable voice! I couldn’t believe that ‘Snow White’ was singing just for me.”

The footage below offers a look (and listen) for Disney guests to preview the audio show at Snow White Grotto. While we’re not exactly sure how often Snow will start her song, you can be sure that it’s special each time, and may catch you by surprise. Watch the video below for what you can expect, or perhaps enjoy the whole show.

Have you noticed the size of Snow White compared to the dwarfs? Or, perhaps heard her well singing? Leave us a comment below about why you love Disneyland’s Grotto!

Comments Off on Did You Know? Disneyland’s Grotto Snow White is TINY!